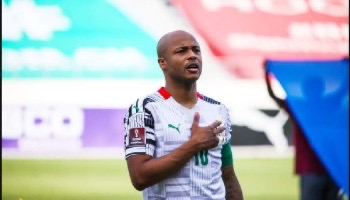 Ghana captain, Andre Dede Ayew scored his historic 10th AFCON goal for the Black Stars against Gabon during a second Group C clash in the ongoing Africa Cup of Nations on Friday evening.

The game which ended 1-1 saw the son of Ghana legend Abedi Pele become the first Black Stars player to score ten goals in the history of the African Cup of Nations.

The 2011 BBC African Footballer of the year is closely followed by Asamoah Gyan who has also scored an impressive eight goals in the tournament.

On 19 January 2010, in the team’s final group stage match against Burkina Faso, Andre Ayew scored his first goal at the AFCON in the 30th minute with a header.

Ghana won the match 1-0 and reached the final where they were defeated 1-0 by Egypt.

The 2009 U20 World Cup winner leveled Asamoah Gyan’s record as the leading top scorer at the AFCON in a game against Uganda during the 2017 edition. Ayew surpasses Asamoah Gyan with a brilliant strike against Benin during the AFCON 2019.