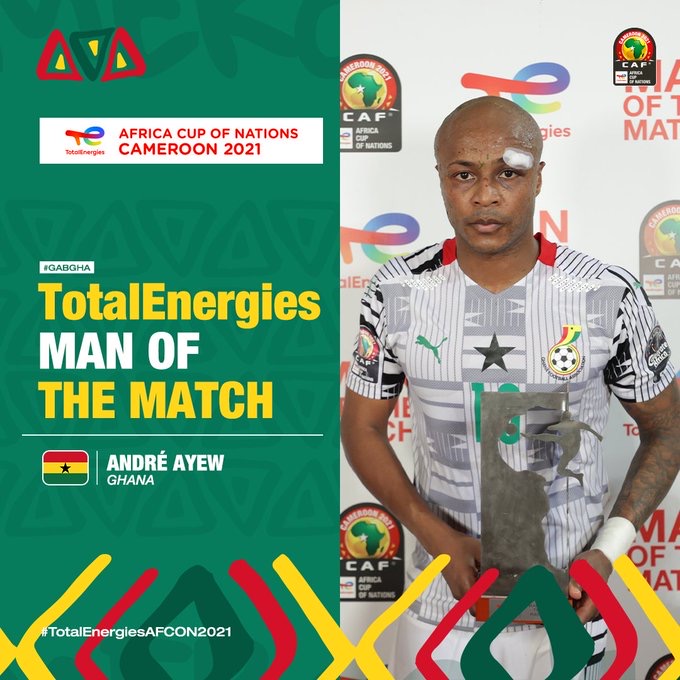 Ngowet Allevinah scored a late equaliser to earn Gabon an important 1-1 draw against Ghana in Yaoundé on Friday to break lots of Ghanaian hearts.

The Black Stars came into the match on the back of a narrow 1-0 defeat to Morocco. The former champions broke the deadlock through captain Andre Dede Ayew before Ngowet Allevinah equalised for Gabon late on.
The Panthers started brightly in Yaoundé with their full backs providing an outlet on the wide areas. Guelor Kaku found space on the right to deliver an inviting cross which Daniel Amartey headed away.
Bruno Ecuele Manga saw his effort blocked by the sliding challenge of Black Stars defender Alexander Kwabena after Iddrisu Baba had deflected a shot into the area.

Jordan Ayew who operated on the right side of the Black Stars attack beat his marker out wide to send a cross straight into the hands of Jean Noel Amonome.
Captain Andre Dede Ayew gave Ghana the lead with clinical strike on 19 minutes to revive their hopes of progressing to the knockout stage.
With his back towards goal Ayew cleverly turned away from Gabon’s Anthony Henri to shoot past the Jean Noel Amonome.
Without their talisman, Aubameyang, Gabon continue to find space on the wide areas through Kaku whose fierce cross was cleared by the outstanding Amartey.

Andre Ayew headed wide of the goal for while Bouanga tried to surprise Luke Wollacut from set piece three minutes before the break.
Gabon started the second half better with several openings against the Ghanaians who tried to keep possession.
Junior Akue headed over the Ghana goal before Baba Rahman headed away Bouanga’s curling effort on the hour mark.
The Black Stars saw Daniel Amartey glanced a header wide of the Gabon 15 minutes from time.
The Panthers left it late to draw level through substitute Ngowet Allevinah cracking low drive past the keeper to boost their chances of a last 16 place.