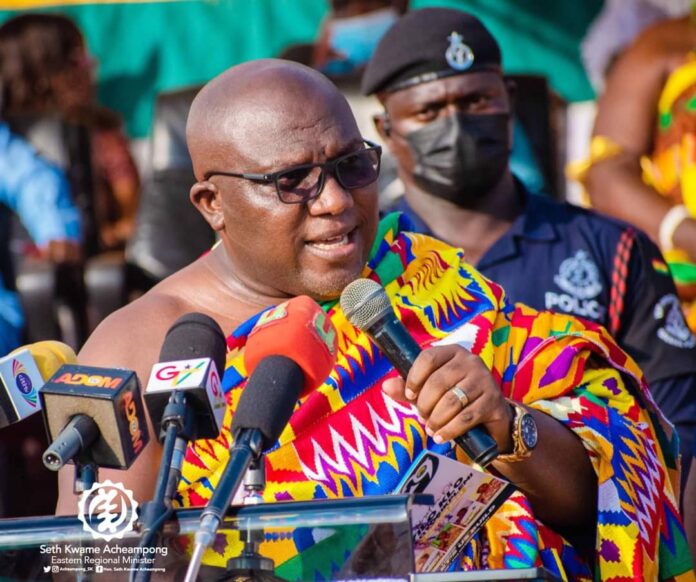 The Eastern Regional Minister Seth Kwame Acheampong who doubles as Chairman of the Regional Security Council says chieftaincy disputes remain threat to peace and stability of the region.

The Eastern Region is fraught with chieftaincy disputes which intermittently spiral into violent clashes.

The Regional Minister says though the menace is not an absolute force to create instability in the region it has the propensity to disturb the peace.

For this reason he said, since assumption of office, engagements with traditional councils, kingmakers and other stakeholders have been intensified with inspiration from the alternative dispute resolution principles to avert chieftaincy related violence.

“We have been challenged by some chieftaincy disputes that hinders public safety and so we’ve had permanent personnel stationed in certain areas which even preceded my entry into the region, we still maintain them. They are indeed a stress on our economy, on our budget, on our funds which we always would want to use alternative means of settling such disputes. Alternative dispute resolution mechanisms are what we are hoping and praying to bring to the fore to ensure that we have these misunderstandings all settled” he said.

The Minister said after taking office, he paid courtesy calls on all the eleven (11) paramountcies in the region for effective cooperation.

“The eleven paramountcies that we have in the region, we have visited and engaged all of them and will continue to engage them and so we have a very smooth administration once you dialogue with them they are able to express their concerns and challenges then you are also able to work towards them” the minister added.

The Eastern Regional Minister said this in an interview with the media to mark a year in office. Seth Kwame Acheampong took office on March 17,2021 to succeed Eric Kwakye Darfuor ,the immediate past regional minister who served from 2017.

Seth Kwame Acheampong said through strategic collaboration with the Police administration, highway robbery menace which threatened public safety in the region has been dealt with.

In a collaboration with the Inspector General of police, we were able to deploy some high level anti robbery squad in some areas of the region to help return some calm and peace into our region, fortunately we’ve made progress , it is not an event ,it is a process and we are still on going in respect to that aspect of our existence here” he said.

Meanwhile , measures are also being rolled out to address the perennial clashes between farmers and nomadic herdsmen in parts of the region.

Seth Kwame Acheampong also mentioned that ,during his one year in office some factories under one district one factory (1D1F) have been executed and commissioned .

In terms of infrastructural expansion and economic empowerment, the Minister said the region has benefited from many projects ranging from the roads ,education ,health and job creation.

“We had the Maa Grace garment at Effiduase, and a shoe factory in Akropong as well as a poultry farm in Akyem Wenkyi, and we have been able to also ensure that certain infrastructure have been developed and upgraded , some school buildings with support from GETFUND and some others that we have receive from the administrator of the common fund”.

Seth Kwame Acheampong urged Nananom and all residents in the region to continuously support government to develop the Eastern region and improve the living standards.