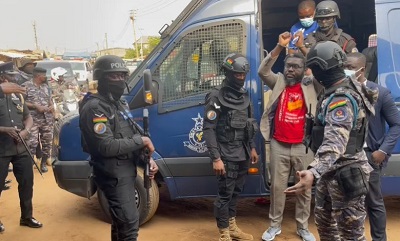 #FixTheCountry Convener Oliver Barker-Vormawor has been re-arrested by the Ghana Police on his way to the Tema High Court this morning.

His lawyer confirmed the arrest to Starr News Tuesday morning.

In his a Facebook post, the activist said he has been charged with: ‘careless and inconsiderate driving” and currently at the Madina police station.

On March 16, Oliver was granted bail by the Tema High Court in the sum of GHC2M with two sureities.

The court presided over by Justice Daniel Mensah said one of the sureties should deposit documents of landed property within the jurisdiction.

As part of the bail conditions, he is also to report to police once a week on a day to be determined by police.

Oliver Barker-Vormawor was arrested on February 11 at the Kotoka International Airport and has since been in detention.

He has been charged for treason felony for comments the prosecution deemed has elements of staging a coup.