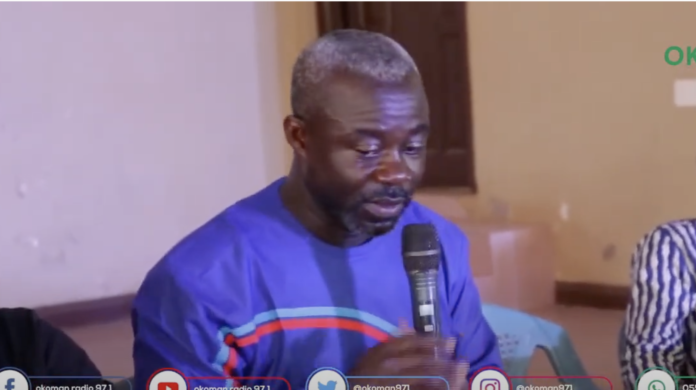 Some aggrieved polling station executives in the Akropong Constituency of the Eastern Region have accused the Member of Parliament for the area  Nana Dokua Asiamah Adjei of peddling falsehood about development in the area.

They claim they have been given a raw deal by the Member of Parliament whose supporters have slapped the executive elections in the area with multiple legal suits for which reason they cannot take part in the Regional Delegates Conference of the New Patriotic Party (NPP).

At a press conference on Friday May 27, 2022 in response to a radio interview by the lawmaker, Kwadwo Aseidu Odei, who is Osainbromu Akropong Electoral Coordinator advised the MP to desist from making comments that will force them to respond.

“After punishing us in such harsh manner, the last thing we expect from her is further pain and we would advise her to stop peddling the lies or else we put out even more of her callousness. She has succeeded in preventing our constituency from taking part in the Regional Elections; she has succeeded in bringing shame and embarrassment to our constituency. That’s enough, no more from her,” he fumed.

According to him, constituents hold no grudges against the MP who has he says chosen to punish them but would want the appropriate processes to be followed in order for Ghanaians to see the truth.

“We only appeal to the National Party Headquarters who have been sued by the Houseboy of the MP and used the name of one of her assigns to quickly address the court issue so we can proceed to also elect leadership of our party in this constituency. We hold nothing against our MP irrespective of all the ordeal she has put us through. We only ask that we make progress,” he stressed.