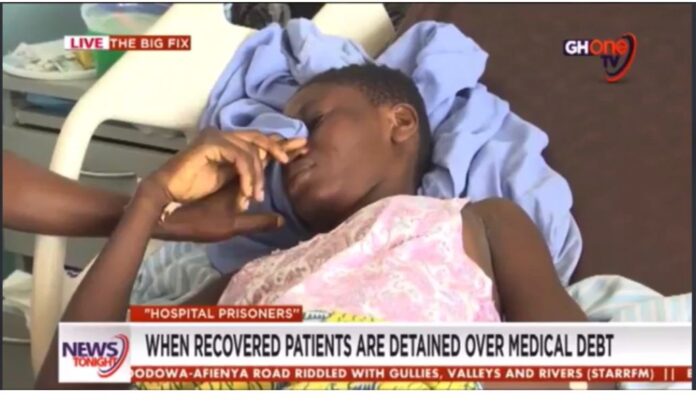 Around the world uncounted numbers of people are detained in public and private hospitals for non-payment of hospital bills, despite the fact that hospital detention is seen as both a human rights violation and inconsistent with efforts towards universal health coverage.

Now, let’s narrow this to our own country- Ghana because such cases have become one, too many.

Imagine being detained at the hospital for weeks, due to your inability to settle your medical bills after treatment.

Well that is the reality of 14 year old Mary Lamptey and 36 year old Akua Ditua who have been detained after undergoing surgeries.

These two, are just a few of many grappling with similar circumstances in Ghana.

Some of the hospital detainees explained their plight to GHOne TV correspondent Evelyn Araba Aidoo in the ensuing report.

Her bloodshot eyes are proof of her endless tears.

The 14 year old has been detained at the Greater Accra Regional Hospital after she had a surgery.

She’s been here for a month.

Mary Lamptey, was rushed to this hospital in April, after suffering severe abdominal pains.

Doctors later diagnosed it to be a complicated appendicitis.

Mary had surgery a day after she was admitted and was discharged in May.

But she had to be kept at the facility because her parents couldn’t pay her bills.

She owes the hospital about 6,000 cedis.

Her national health insurance card could not absorb part of the bills because it had expired.

Mary’s mother had to also stay at the hospital while she was detained.

She has left her other children including a one-year – old son at home in Dansoman Gbegbeyise, which is far away from this hospital.

Mary Cofie, victim’s mother (She
has been operated on and brought back to the ward. We Cannot afford the GHC6,000 bill to get her discharged. We are hoping a Good Samaritan comes to our aid)

Settling the hospital bill is not the only challenge here.

Mary and her mother don’t even have money to buy food.

As the mother and daughter are crying and holding hands, Mary’s mother said , if not for a stranger they wouldn’t have had a meal the previous night.

From the Greater Accra regional hospital, we went to Mary’s home in Dansoman Gbegbeyise.

He had just returned from fishing.

He had to leave the four children all by themselves to go fishing, at dawn, so he could send 20 cedis to the daughter and wife at the hospital.

The family of seven, lives in this single room.

Ernest – father, Mary (I do not work with fishing equipment. I do everything with my hands. I make between 30 to 40 cedis a day. I have t gone fishing for about a week because of the kids. I have no savings and whatever I make , I sent to them.)

The scene here paints a picture of the real situation this family is in.

It is not surprising that Mary’s mother cannot pay the 6,000 cedis hospital bill for her to be allowed to leave the hospital.

Ernest – Mary’s father (we need help. Even if it is a loan we will have to pay back over time, we will appreciate it.)

This situation is not peculiar to Mary Lamptey.

Back at the Greater Accra Regional Hospital, in a room beside Mary’s ward Akua Ditua, has also been detained here for a week.

She was admitted and treated for hernia in May.

She has to pay about 4000 cedis before the hospital will allow her to go home.

But she says her husband has abandoned her because he cannot pay the bill.

( I have been here for long. My husband took off to find money to pay the bills but has since not returned and made no contact as well. I need your help Ghanaians, so I can go home and take care of my kids)

Mary and Akua, are just two of the many people detained in hospitals because they cannot pay their pills, something you can refer to as “hospital prisoners”.

Many of such victims, including new mothers, are forced to sleep on the floor at some hospitals.

Detention of patients in hospitals over unpaid medical bills has become very common.

Hospital officials justify this practice on the basis that once they release patients it becomes difficult to follow up to retrieve their money.

STAND UP: [Hospital detention is also common in countries that have major gaps in their health care funding systems and that have not implemented health insurance. Health facilities receive too little and unreliable state funding for their services. The hospitals are therefore largely dependent on out-of-pocket payments]

Last year, the Greater Accra Regional Hospital, lost a total of over 160 thousand cedis to 88 patients who absconded, according to officials.

And that’s not all, according to the social welfare department at the facility, the trend is worsening.

In one case, 400 inmates were reported in a single hospital in Kenya.

In May, the Asantehene, Otumfuo Osei Tutu II Foundation paid 30,000 cedis to free 26 pregnant women who delivered in Komfo Anokye Teaching hospital and were under detention for their ability to pay their medical bills.

President of the Ghana Registered nurses and midwives association, Perpetual Ofori-Ampofo, says the situation exposes the gaps in Ghana’s health system.
According to the World Health Organisation, as a first measure, hospitals could offer the option of installment payments for certain patients after discharge.

However, some analysts say this is not a feasible option for people below the poverty line.

They believe paying hospital bills for those who cannot afford would only drive them further into poverty.