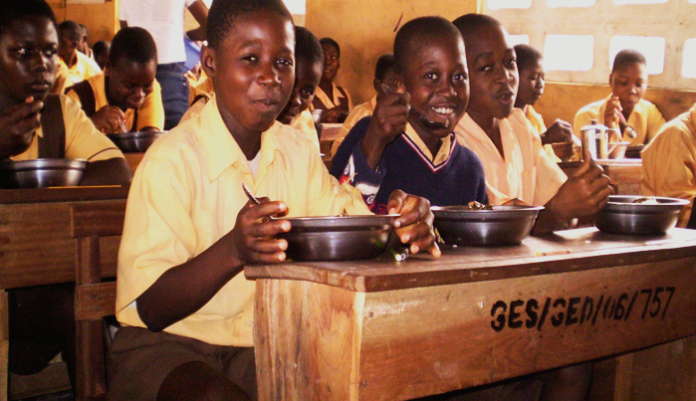 Monday June 13th, marks the start of the sixth week since caterers under the School Feeding Programme placed on record their plight to government on their inability to continue to render services, while government decisions arrogantly continued to erode their meagre savings spent to sustain the programme which is affected and whittled away by registered micro economic indicators.

These caterers have since embarked on an industrial action to register their abhorrence and protest of the ill and unfair treatment meted out to them by government. This action was meant to bring to the notice of heads of the concerned ministry and agency if the above raised issues haven’t yet reached them.

To bring it to the attention of the reading public, the purpose of the school feeding programme housed under the Ministry of Gender, Children and Social Protection, is to increase school enrolment, attendance and retention. The programme is also meant to reduce hunger and malnutrition amongst pupils in addition to enhancing domestic food production especially in deprived and rural agrarian communities across the country.

Sad but legitimately, the said caterers engaged to provide these services, have been on strike for the past six weeks now. The legimate demands of these caterers are simple. They demand the following:

According to the caterers, they contracted loans from various financial institutions, or took supplies of food items on credit from suppliers to meet their contract to feed these pupils. Thus, the immediate payment by government is meant to pay off these debts and sustain their credit worthy status. Their situation is exacerbated by their creditors who are on their necks each day and night. In addition, at the current rate of Ghp 0.97 per pupil per day, it is practically impossible for them to prepare a decent meal at the prevailing current economic conditions.

Accordingly, the caterers have a legitimate case. What decent meal can be provided at Ghp 0.97 in Ghana today; with this high cost of living and with galloping inflation, particularly the exponential growth rate of inflation on food items, at these dizzying levels? This is particularly worrying and calls for responsible leadership to address these pertinent legitimate calls.

The absence of such service providers has affected school attendance; because the absence of these caterers is directly related to the attendance of pupils, especially those in the lower primary, in schools in rural, deprived and poor communities. In other words, several numbers of the 1.69 million pupil-beneficiaries of this programme delivered through these caterers, who were fed before the curtailment, brought about through the strike action, are currently not attending school and may not return if government does not address the pending issues raised by these service providers.

It beats my imagination how the attitude of government seems lethargic in addressing this urgent matter. Those who share this position cannot be faulted when government continues to exhibit these hard core traits of insensitivity to the plight of the deprived and the most vulnerable in our society. Government cannot claim funding is the issue when we now know that huge sums of our taxes have been clandestinely released towards the fulfilment of a private and personal pledge to build a cathedral.

So far, the Akufo-Addo government has illegally and unlawfully spent a whooping GHC 200m to finance the fulfilment of his personal pledge to his God to build him a cathedral; without the requisite permission and parliamentary approval for any such disbursement of state funds. In his own words, Akufo-Addo said, “I made a pledge to God, that, if I become the President after two unsuccessful attempts in the 2016 Presidential Elections, I will build a Cathedral to the glory of God.”  Meanwhile, he has reneged on the use of taxpayers money to address issues citizens voted him into power to tackle; such as the payment of school feeding caterers to carry out their services of providing decent meals for 1.69 million pupils to continue to keep these children in school.

Though a Christian, it is not acceptable and remains inappropriate for Akufo-Addo to use public resources in the fulfilment of a personal pledge, such as the building of a cathedral, whilst a significant number of the population wallow in glaring abject poverty. As the case stood, the narrative was that the building of the cathedral was not going to burden the public purse. So, why did Akufo-Addo stealthily initiate processes, unlawfully, using his cousin Ken Ofori-Atta, to do otherwise.

It is a documented fact that at no time has government forwarded the cathedral project in any national budget to Parliament with an assigned financial allocation for approval. The first budget Statement and Economic Policy under Akufo-Addo to capture the cathedral project was the 2019 budget, and here is what it said on page 193, paragraph 1001; “meeting the spiritual needs of our people with the promotion of the Ghana National Cathedral”. It’s worth noting that the 2017, 2018 and 2022 budget statements never mentioned the cathedral project at all. In the budgets for 2019, 2020, and 2021 although mention was made of the cathedral, no funds were allocated to it.

Any indication of the state providing seed money may rather be traced to the Finance Minister’s speech, which he read in brief to Parliament during the presentation of the 2019 Budget Statement and Economic Policy. In the 2019 budget speech, paragraphs 156-157, on pages 104-105 under National Cathedral, the Minister stated as follows: Mr Speaker, the state is facilitating this process by providing the land, the Secretariat, and seed money for the preparatory phase. Mr. Speaker, the President is determined that the building of the National Cathedral would not put undue financial burdens on the state. He has therefore proposed a partnership between the State and the Ghanaian Christian community both at home and in the Diaspora.

The narrative around the cathedral project exposes Akufo-Addo and his cousin Ken Ofori-Atta as having no regard for our laws, processes and procedures. This capricious use of executive power unlawfully and unreasonably, is what has enraged the public. No citizen had a problem when the indication was that the cathedral project was to be funded with private resources. Didn’t government tell the Supreme Court that it’s contribution is to provide land for the construction of the cathedral? And that the actual construction was to be sponsored and financed by the churches in the ruling of the JAMES K. BOMFEH JNR. V. ATTORNEY GENERAL case?

In fact, the churches were told same as restated by the Secretary of the Christian Council under whose watch the cathedral project was birthed. According to Rev. Dr. Kwabena Opuni-Frimpong, government said it would only be a facilitator; while the churches were to provide funding for the project. He further said, “The then Minister of Chieftaincy and Religious Affairs, Honourable Kofi Dzamesi, was one of those who explained to us again and again, that the churches in Ghana are going to build the cathedral and not the government.”

In all humility, it is not right, it is immoral, and is unaccountable for Akufo-Addo to cause Ken Ofori-Atta to apply GHC 200m of public funds towards building an unapproved, and unbudgeted cathedral; when school children sit at home because school feeding caterers are owed their due. Unlike the cathedral project, the budget for the School Feeding Programme was contained in the 2022 Budget Statement and Economic Policy, which was debated, considered and approved by the representatives of the people. Release of public funds for the construction of an unbudgeted and unapproved cathedral to the detriment of budgeted and approved programmes like School feeding cannot be tolerated in any democracy, and we must not tolerate same.

Government must quickly honour it’s obligation to pay the caterers and increase the cost of feeding per pupil as soon as possible. This is what government was given the mandate to execute with the GHC 881m captured in appendix 6, page 272, of the 2022 Budget Statement and Economic Policy under the School Feeding Programme.