The Ghana Education Service has directed heads of senior high schools to keep schools opened and students supervised despite the strike by teacher unions in the country.

The GES in a statement also noted it has invited the striking unions to discuss their concerns and the way forward. 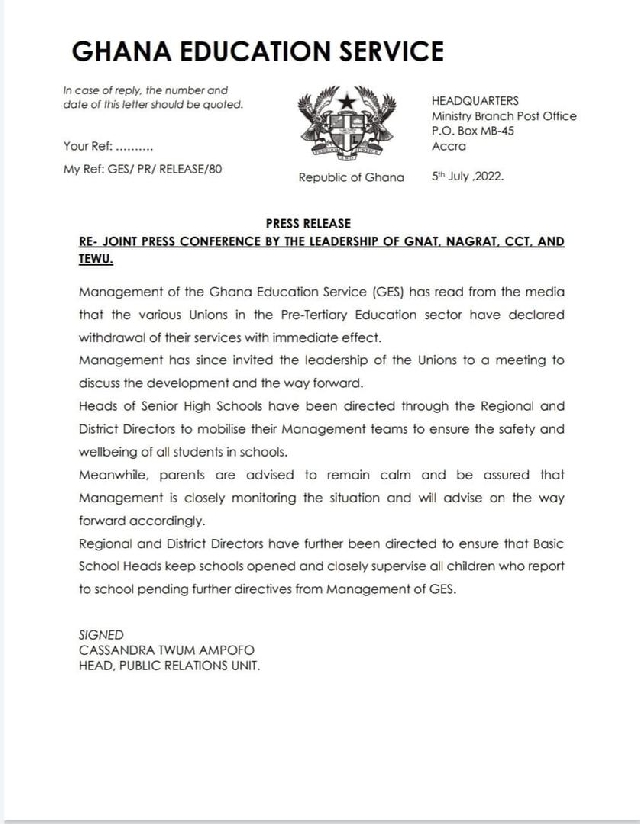 This comes some after NAGRAT indicated their decision to commence strike if the government does not act on their demand for Cost of Living Allowance (COLA) by end of June 2022.

Addressing the media in Accra, General Secretary of GNAT, Thomas Musah disclosed that inflation among other conditions in the country are affecting their meager salary hence the decision to embark on the strike action.

According to him, there have been a number of calls and written letters to the government but no response.

“A passionate request in 2022 and recently an official correspondent dated 24th June 2022 by the Secretary General of TUC addressed to the President of the Republic of Ghana has not had any acknowledgement from same.

“The loud silence from the Government of Ghana on this matter is worrisome and leaves much to be desired of any government that cares about the plight of its workers. We wish to unambiguously express grave concern of the excruciating pain of poverty that have been bestowed on the Ghanaian teacher and the educational worker and leaves us with no option than to where we are now.”