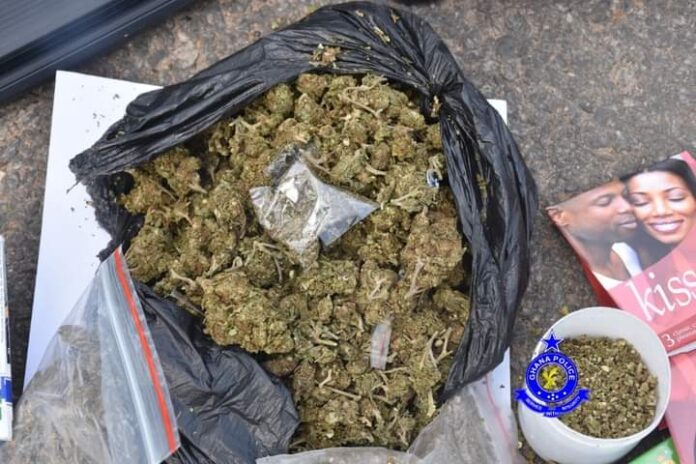 The Bula Spot and Little Ben brothels peddle drugs such as cocaine, marijuana, marijuana candies and other hard drugs inside drinking spots at the brothels.

“Inside the Bula spot and Little Ben, there is serious drug peddling. They sell them at the spot. People even come from outside to buy drugs there. Cocaine, Wee bitters, wee toffee, and tramadol among others. I am always with commercial sex workers so I know what is happening. It is serious, ” a source familiar with the situation at the brothels told Starr News.

The accused persons were arrested red-handed on June 31, 2022, when a joint team of Military, Police, Immigration and New Juaben South Municipal Security Council (MUSEC) as part of a fact-finding mission to the brothels following the Starr News expose’.

The Municipal Security Council have ordered operators of the brothels to demolish the facilities.

Many of the trafficked Nigerian girls who were confined in the brothels have relocated to residential homes rented by the traffickers after Starr News expose’.

Little Ben whose brothel facility has been constructed on encroached railway land demolished portions of the facility.

However, it is not clear the situation at Bula Spot.

The source said, the majority of the victims are Nigerians but there are some other African nationals specifically mentioned a Cameroonian who was among them.

The source explained that Little Ben’s brothel had about 20 cubicles with concrete-made beds. Each cubicle was rented to the traffickers at about Ghc80 per day.

“Yes, about Ghc80 cedis daily. But they are able to pay because a day, each of the prostitutes is able to make between at least Ghc200 sometimes more than that especially when they go out with the men under special arrangement”

Operators of the brothels make huge financial gains from the facilities hence able to grease the palms of the security agencies hence despite notoriously operating in the centre of Koforidua no significant action has been taken against them.

The operators have been arrested countless times by the police whenever some of the victims manage to escape and lodge complaints to the police.

However, none has been prosecuted.

Ghana is a source, transit, and destination country for children and women trafficked for the purposes of forced labour and commercial sexual exploitation. Trafficking within the country is more prevalent than transnational trafficking and the majority of victims are children.

According to the US Department of State’s 2021 trafficking persons Report, the Government of Ghana does not fully meet the minimum standards for the elimination of trafficking but is making significant efforts to do so.

The report, however, stated that the government demonstrated overall increasing efforts compared to the previous reporting period, considering the impact of the COVID-19 pandemic on its anti-trafficking capacity; therefore Ghana remained on Tier 2 watch list.

“A lack of adequate resources for law enforcement continued to hinder investigations and prosecutions, and shelter capacity remained insufficient. The government did not adequately address corruption in trafficking crimes, including alleged complicity from officials who facilitated trafficking, and it did not amend the anti-trafficking act regulations to remove the option of a fine in lieu of imprisonment in cases where the trafficker was a parent or guardian of the child victim”. Excerpts of the US Department of State’s 2021 trafficking in person report stated .