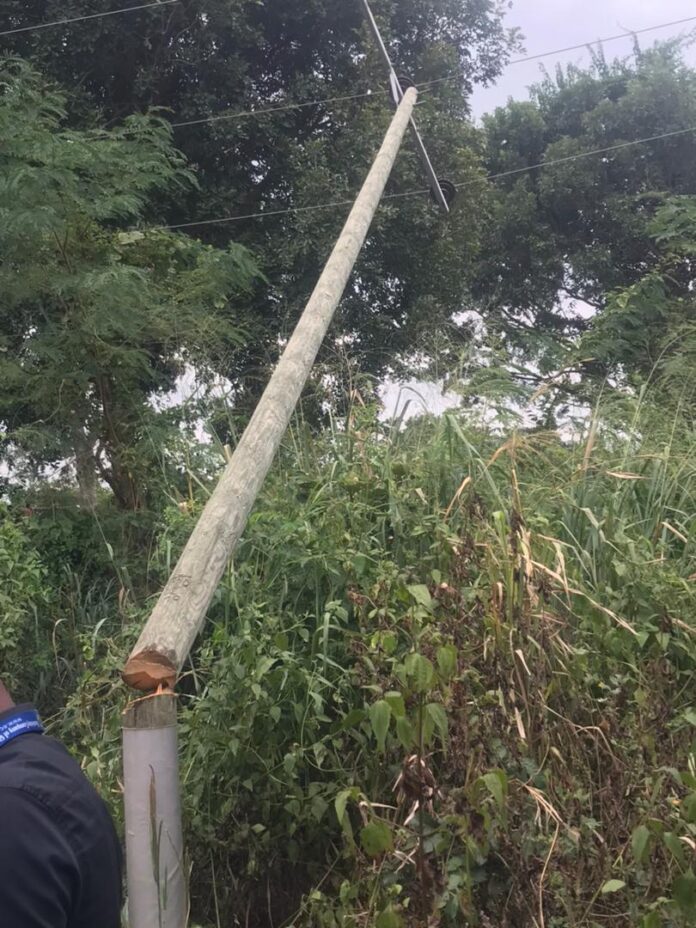 Some persons have cut down high tension poles belonging to the ECG at Adelakope on the Tema-Akosombo highway in the Lower Manya Krobo Municipality of the Eastern region.

The poles connect power to communities such as Akuse junction, Akorley and Aseseeso in the Okere district.

The incident is believed to have happened Thursday night in protest against continuous power cuts in the area.

“Unidentified persons reportedly around 11:00 pm cut off a high tension Pole with chainsaw at Adelakope on the Tema, Akosombo high way in the Lower Manya Krobo Municipality of Eastern region which connects power to communities such as Akuse junction, Akorley and Aseseeso in the Okere district,” Opambour Gyaman Simon of Rite FM reported.

ECG neither confirmed or denied the incident when contacted.

The Electricity Company of Ghana, ECG, switched feeders supplying power to Yilo and Manya Krobo municipalities on July 27, 2022, over attacks on its staff and tempering of its transformers by some unscrupulous residents resisting prepaid meter installations.

The power cut to the two municipalities is having serious implication on health, education and the local economy.

The Yilo Krobos District Education Directorate has warned second cycle boarding schools in the Municipality risk closure if electricity supply is not restored in the coming days.

According to GES, this is unsustainable. Meanwhile, parents are being asked to buy torchlight for their wards to learn particularly those writing West Africa Secondary School Certificate Examination (WASSCE).

Furthermore, management of Yilo Krobo and Lower Manya Krobo Municipal Health Directorates in a joint statement issued on August 1, 2022, warned of a public health emergency if power is not restored to their districts immediately.

The health directorates said the power outage is seriously affecting clinical services in hospitals in the municipalities.

For instance, in Yilo Krobo, the power outage has caused the relocation of municipal Cold Chain Equipment, which includes vaccine fridges and freezers for ice packs.

The directorate is also spending GH¢500 a day to power a generator.

“Ongoing COVID-19 vaccination is also affected as a result vaccination team, district and sub-district supervisors are not able to charge their mobile phones and tablets, therefore not been able to enter data and monitoring/supervisory reports,” the statement said.

The Yilo Krobo District Hospital is barely three months old with very little capital and a host of challenges but forced to spend an unbudgeted amount of GH¢10,975 to power its diesel generator, according to the statement.

At the Somanya polyclinic, the directorate also said the only generator plant “which was donated by ECG to Somanya polyclinic has been taken back without any explanation by ECG and therefore the facility has no alternative source of power.”

“The power outage has affected all aspects of clinical and public health care in the facility. The most affected areas are maternity units, laboratory services, in-patients, vaccine fridges and administration.”

The directorates say it cannot sustain the high cost of fueling generators at the various hospitals forewarning that “ we may not be able to sustain it to provide the quality health care services as expected.” therefore appealing to the government and management of ECG to restore electric power supply to all health facilities within the affected areas “in the shortest possible time to avert a possible public health emergency.”