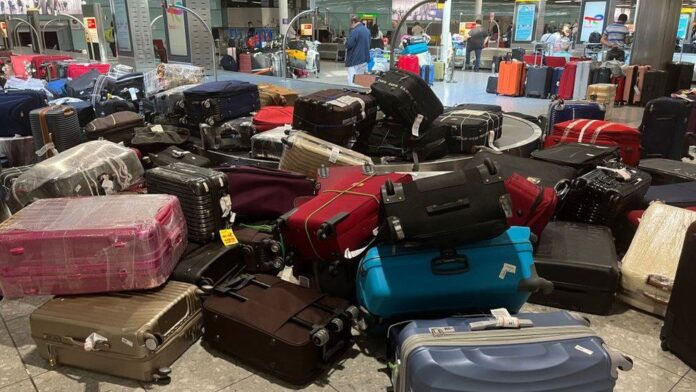 Jenny Loucas scrolls through photos of her 40th birthday celebrations in Greece, knowing that much of the clothes and jewellery she had worn in the pictures are lost for good.

For while she had enjoyed a wonderful holiday, her luggage then disappeared after she had checked it in for the flight home to London Gatwick.

“I had such a lovely time, but came back to a low,” she says. “I look back at some of the pictures and think, ‘oh no, that was in the bag too’.”

Two months later and Easyjet has confirmed that her luggage has been permanently lost. “We are very sorry for the loss of Ms Loucas’s bag, and we understand the frustration this will have caused,” an Easyjet spokeswoman told the BBC.

As newspaper headlines and social media posts around the world have shown in recent months, Ms Loucas’s case is far from unique, with some commentators calling it “the summer of lost luggage.”

The situation has been blamed on staff shortages both at the carriers, the airport security staff that have to scan all the checked-in luggage, and the ground handling firms that are typically employed to get all these suitcases and bags onto the planes and then back to the carousels. 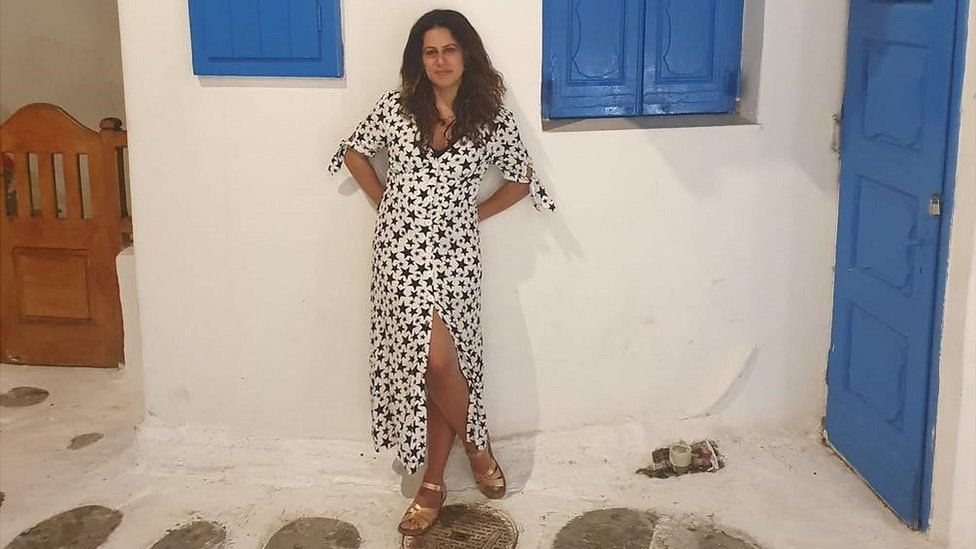 With many of these teams seeing redundancies during the pandemic, they now can’t cope with the pent-up demand to go abroad on holiday again. It has led to images of hundreds of missing suitcases piled up in warehouses.

And one insurance firm, Spain’s Mapfre, said that the number of passengers reporting missing luggage this summer was 30% higher than in 2019, the last year of normal travel before the pandemic.

While no global estimates are yet available for the volume of delayed or lost luggage so far this year, data for 2019 shows that the problem has always existed.

That year 19 million bags and suitcases were late arriving around the world, and 1.3 million were never seen again, according to an annual report by SITA, a provider of baggage management software. Add luggage being damaged or pilfered, and 5.6 items per 1,000 passengers were “mishandled”.

To try to keep tabs on their items of luggage, a growing number of passengers are turning to technology.

Apple has reportedly seen a rise in sales of its AirTag tracking device. The AirTag works by sending out a secure Bluetooth signal that can be detected by nearby devices in the Find My network. These devices send the AirTag’s location to the iCloud, allowing the user to go to the Find My app and see it on a map.

In other words, you can see exactly where your missing suitcase is, via your smartphone or computer. In an article last month by Bloomberg, one man who travelled from California to Scotland for a wedding was able to see his luggage go to Toronto, Canada, and then Detroit.

Other travellers are attaching trackers that use GPS to their luggage. 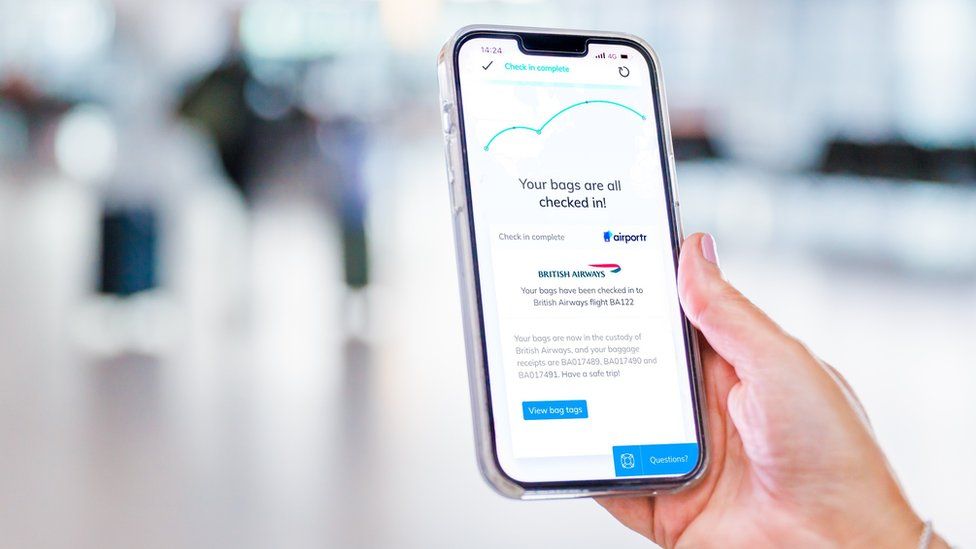 Ms Loucas says she hasn’t used tracking tags before but she “definitely would do so” from now on. “Anything to stop my luggage being lost again,” she says.

Yet while such tagging devices may give a passenger peace of mind, travel industry expert Eric Leopold says they don’t solve the core issue – stopping the backlogs that prevent bags from catching the same flights as their owners.

“Tracking the bags is helpful when 99% arrive on time and 1% are mishandled, but when thousands of bags are stuck in London or elsewhere, the tags are not helping move the piles of bags,” says Mr Leopold, who is the founder of air travel consultancy Threedot.

SeeTrue is one company that hopes to help airports and airlines get luggage onto planes more efficiently in the first place. The Israeli firm makes software that can do the security scans on check-in luggage much faster than human security staff.

“SeeTrue uses artificial intelligence and computer vision algorithms to discover prohibited items in bags,” says chief executive Assaf Frenkel. “It connects to the existing X-ray and CT scanners, and detects in real-time, faster and more accurately than most human eyes, always on, and never getting tired or distracted.

“As a result, baggage is delivered on time to the planes and not left behind.”

For UK tech firm AirPortr, its approach to tackling the problem is to remove the need for passengers to have to queue up at the airport to check in their luggage before their flight.

Instead passengers can use its app and website to arrange for their luggage to be taken door-to-door.

Currently available for British Airways and Swiss International Air Lines flights between London and Geneva, an AirPortr worker will pick up a person’s suitcase from their home. This driver will then take it to the departure airport’s luggage area in the bowels of the terminal building for check-in, rather than going into the departure lounge.

Then at the destination airport, one of AirPortr’s transportation partners will pick up the suitcases and deliver them to the person’s destination address.

Fees start from around £40 for one item of luggage, one way, if you don’t mind your suitcase being picked up the day before you fly. But prices can be more than double that if you want your luggage collected during a specific one-hour slot on the day. The cost also rises the further you are from the airport.

Although the service doesn’t add any flight emissions as bags travel on the same plane as the passenger, it does obviously mean an extra car or van journey to the airport.

AirPortr’s chief executive Randel Darby set up the firm in 2013, saying he was so frustrated that baggage was “travelling in the same way we have done for almost a century of commercial aviation”.

His aim is to expand the service around the world, and rather than just aiming it at business travellers, he hopes for it to ultimately become a “utility” service used by all types of holidaymakers. 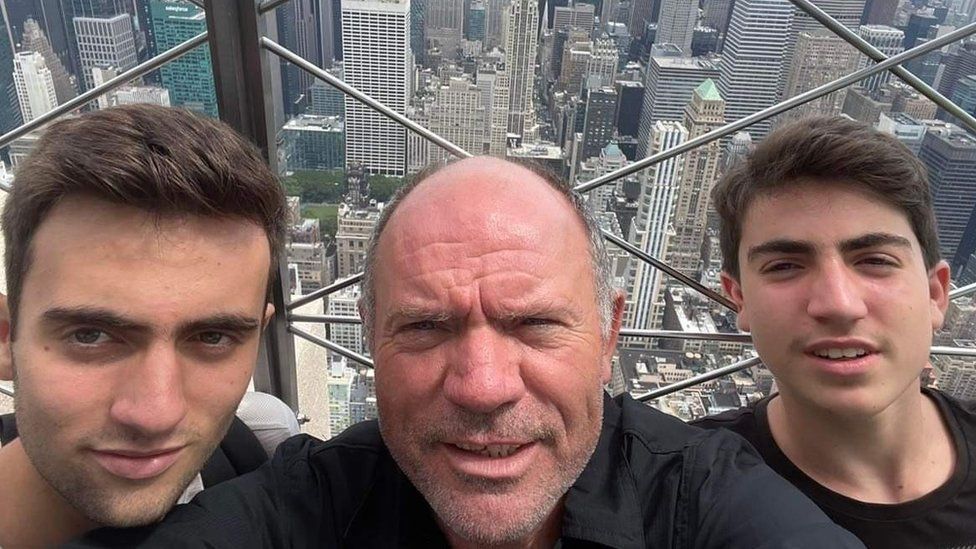 Mr. Darby even believes that airlines and airport operators will start to subside people’s use of AirPortr, because it is “more cost effective than handling passengers checking in their luggage on-airport”.

Bill Doody, a British expat who lives in the French city of Toulouse, is one such person after German airline Lufthansa mislaid four of his family’s suitcases for almost a month when they travelled to New York via Frankfurt.

“I’ve called Lufthansa non-stop, but most of the numbers were dead,” he says. “Lufthansa turned this into a trip to remember for all the wrong reasons.

“We ended up washing our underwear in the hotel sink,” adds Mr Doody, who has since flown to Australia for work with a GPS tracker attached to every item of luggage.

Back in London, Ms Loucas is now trying to get compensation. “I’ve lost all my stuff. There was irreplaceable jewellery in there. I must have lost between £1,500 and £2,000 [worth]. Easyjet is asking for receipts, but I don’t have receipts for everything.”