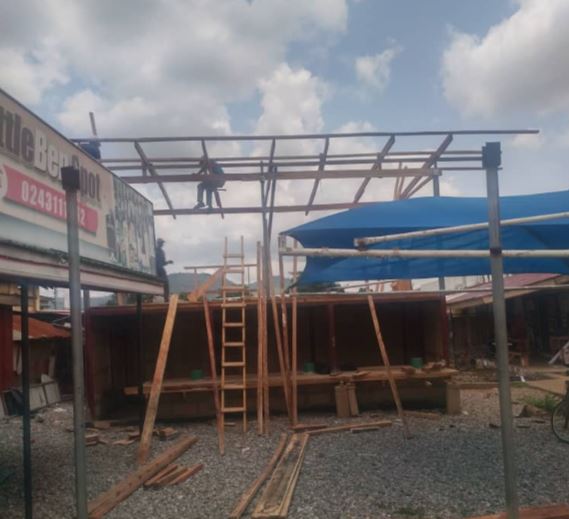 There is anger in Koforidua the Eastern Regional Capital as a businessman releases a document purported to have obtained from Ghana Railway Company Limited permitting him to construct a drinking spot on the Koforidua stretch of the defunct Eastern railway line.

The construction of the drinking spot was stopped by the New Juaben South Municipal Assembly early this year for not having a permit.

However, the businessman – Richard Asante alias Little Ben has resumed work by constructing an expanded facility believed to be a brothel facility but says it is a chop bar.

The letter dated 15th September 2021 issued by an anonymous project manager at Ghana Railway Company Limited (GRCL) reads ” This is to advise that GRCL has authorized the bearer of this letter Mr. Richard Asante to temporarily operate a drinking spot located on the railway track at Koforidua train station. This has become necessary due to the fact that residents were using the said location as a refuse site.

It must be stated that the structure would be removed immediately without any compensation as soon as the Eastern lines get to Koforidua” the purported permit stated.

This is creating an uproar among concerned residents in the municipality.

“So you people sit there at the assembly and allow little Ben to put up a structure for brothels at the railway line right opposite his shoe shop. Are we serious at all” a resident fumed

The brothels fetched them between Ghc1,000 to Ghc2000 daily as cubicles rented for commercial sex activities were priced from Ghc 80 to Ghc100 daily.

The brothel by Little Ben Shoes was erected on the railway line buffer land behind KFC but has since been demolished after the exposure.’ 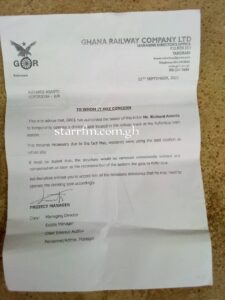