Life will come to a standstill for millions as the UK says goodbye to Queen Elizabeth II.

Her state funeral will take place at Westminster Abbey in London at 11:00 BST, with 2,000 people in attendance.

Hundreds of thousands of people are expected to line the streets of the capital.

Ahead of the funeral, King Charles said he had been “deeply touched” by public support for him and his family.

Foreign royals and world leaders will join the Queen’s family for a service that will be watched by hundreds of millions globally.

Schools are closed, as are many shops and other businesses, on the national bank holiday.

After the service, the Queen’s coffin will be taken from the abbey to Wellington Arch, at London’s Hyde Park Corner.

A hearse will then travel to Windsor for a final family ceremony at a chapel in Windsor Castle.

Royal Family will return to the chapel for a private burial service that will see Elizabeth II interred alongside her late husband, the Duke of Edinburgh. 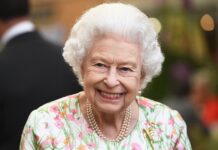 Queen Elizabeth speaks out as Barbados becomes a Republic