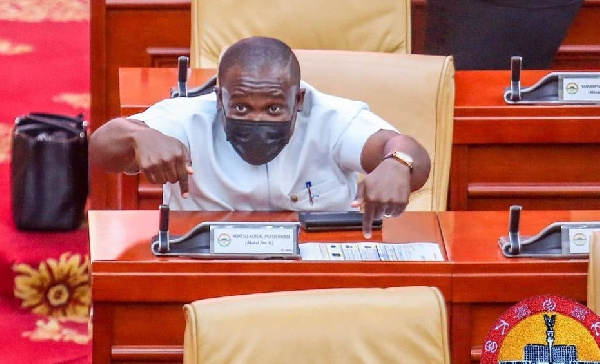 The Member of Parliament for Ningo Prampram, Samuel Nartey George has berated the National Communications Authority (NCA) for its failure to ensure quality service delivery by telecommunications companies in the country.

According to him, the regulator has been silent on what he describes as poor services from the telcos in the past few weeks but rather focused on punishing unregistered subscribers.

He explained that in any functional democracy, the regulator, would have issued public statements to assuage the concerns of citizens but that has not been done.

In a social media post, Sam George said management of the NCA in the past “would have told customers of the service providers what steps they are taking to ensure that the telecommunications Companies improve the service experience.”

“Alas, this is Ghana! A country where the regulator is more interested in punishing the citizens than ensuring they are protected from private interest.

“It is imperative that CEO of the NCA Joe Anokye and the regulator immediately outline to the Ghanaian public what remedial steps they are taking to ensure an improvement in call quality and the overall telecoms experience. Enough of the lackadaisical behaviour! The customers deserve much better!,”

He further indicated that “The NCA, they major in minors and minor in the major. As the regulator they are supposed to be protecting the interest of customers but in this case we see a regulator who is not interested in customer satisfaction and the quality of service  that the Telcos are giving, but are rather, conniving with the Telcos who are offering us crappy services.”

The deputy ranking member for parliament’s select committee on communications attributed the silence of the NCA to its fixation on getting the telcos to punish subscribers who fail to register their SIM cards.

“So long also as the telcos keep quiet and go ahead with the illegal directives of the NCA,  “When you have a regulator using service providers to punish the customer, that regulator is unable to enforce quality from the service providers and that is the mess we see.

“Everybody whether you have registered or not registered is having a horrible user experience be it voice or data,” he stated.