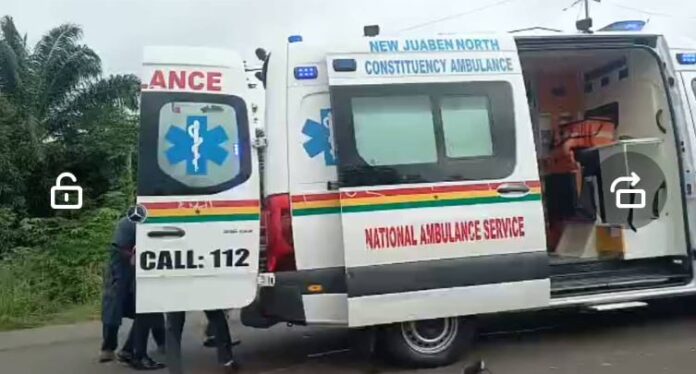 A tricycle rider has died in a horrific side-impact collision with an ambulance in Koforidua, the Eastern regional capital.

The New Juaben North constituency embossed ambulance was en route to St. Joseph hospital to pick up an emergency case to Accra.

However, the tricycle rider recklessly crossed the ambulance driver while other cars had given way to the ambulance resulting in a side-impact collision.

The impact of the crash ejected the rider and a passenger aboard the tricycle on the road under the ambulance which crushed them.

The victims were removed into the accident ambulance and were rushed to the hospital but the rider died shortly after arrival.

The injured passenger is however responding to treatment.

Personnel from the motor traffic and transport department of the Police visited the scene and after taking inventories towed the Pragya tricycle to the Regional Police Headquarters for further investigation.

The family of the deceased in Accra has been informed.

The Eastern Regional Director of the Ghana Ambulance Service, Michael Gaani told Starr News “It happened Friday, September 23, 2022. The ambulance was going for an emergency to Accra for a CT scan. So other cars stopped giving him the way and this rider thought he could be fast and go. So the Pragya grazed the side of the ambulance and it hit him on the chest. So he died.”

“On Tuesday one of the Pragya hit the back of our ambulance at Aburi and destroyed all the lights. They are crashing our ambulances and killing themselves. The riders do not know the regulations on the road and they are just riding anyhow”.

One dead, two injured after trotro vehicle crashes into traders at Suame Roundabout 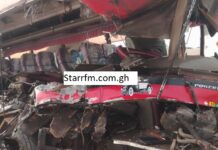 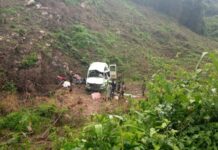