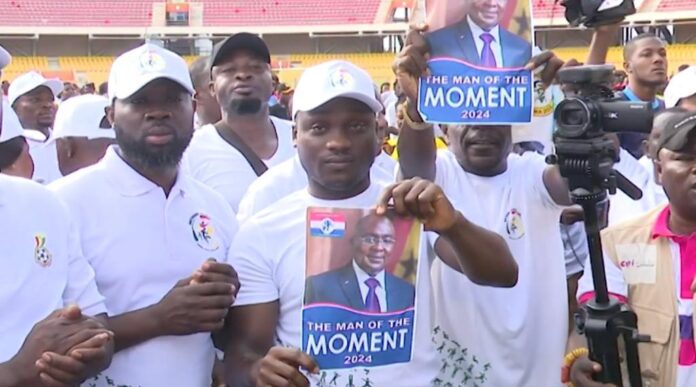 A group in the New Patriotic Party has called on the National Executives of the party to sanction Dr Mahamadu Bawumia and the Minister for Youth and Sports for what they describe as a “state-sponsored breach of the NPP code of conduct”.

The accusation comes after the ministry of youth and sports embarked on a health walk dubbed “national fitness day” in the Greater Accra region on Saturday, September 10, with the Vice President as the guest of honour for the walk.

The pressure group in the governing New Patriotic Party known as “Queens” raised concerns about abuse of state resources and incumbency to pursue the personal political agenda of the sitting Vice President, Dr Bawumia. They alleged that a whopping sum of 10 million Ghana cedis was expended on the “Bawumia campaign” under the guise of national fitness day.

The group also showed pictures of participants in the walk who were organized to wear Bawumia for president branded t-shirts. A known government appointee and a member of the Bawumia campaign team was spotted in a picture showing Bawumia impressed posters during the walk.

According to the group, this amounts to a clear breach of the party’s code of conduct outlined by the National Executive Committee and the National Council of the NPP.

“We are calling on the national executives of the NPP to sanction Dr Bawumia and the Minister for youth and sports for disregarding the party’s code of conduct”, the group lamented in a statement copied to Starrfm.com.gh.

The group added that a section of Ghanaians have also expressed their reservations about how the Vice President has abused state resources for his personal political agenda.

According to them, many citizens on social media have described it as a poor attempt at equalizing the famous ‘Adru Woso’ Health Walk for Hon Alan Kyerematen.