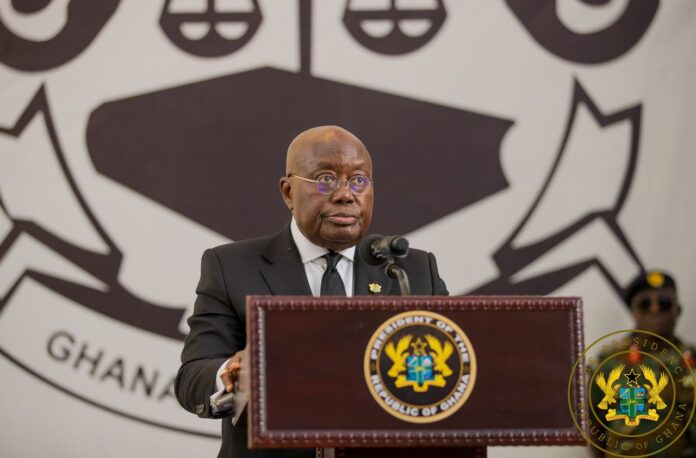 President Akufo-Addo has asked Ghanaians to say no to persons who he says have made it their passion to make disparaging remarks against the Judiciary and the Electoral Commission for selfish, parochial and partisan reasons.

According to President Akufo-Addo, “Just as Government continues to implement policies to advance the rule of law, and, thereby, reinforce the confidence of the people, and shore up our nation’s reputation as a country governed by the rule of law, there are some who have made it their political agenda to disparage systematically the image of the Judiciary for selfish, parochial, partisan reasons.”

He stated that “These are the plaintiffs, who go to Court, indeed, to the highest court of the land, provide not a single shred of evidence to back their claims, and, yet, insist that their claims be upheld, despite the elementary violation of the ancient, common-law rules for the discharge of the burden of proof that such a result would entail.”

The President continued, “It is no wonder that their claims were unanimously dismissed 7-0 by the apex court. The result of this case is in stark contrast to the result of a similar one in 2013, when the unsuccessful plaintiffs managed to persuade four (4) out of a nine (9) member court to find for them, and, yet, the earlier plaintiffs chose not to wage a political war against the court.”

President Akufo-Addo made this known on Monday, 12th September 2022, when he delivered the keynote address at this year’s Bar Conference of the Ghana Bar Association.

He told Members of the Bar that Ghana is governed in accordance with the rule of law, and not on the basis of political considerations.

“It is important that all of us, especially us lawyers, who cherish the democracy we are building, say no to such persons, and guard jealously our democratic way of life, which we have done so much to bring into being. Independent judges, administering the law, protecting the human rights of citizens, and ensuring public accountability, are strong pillars of our democracy,” the President added.

Just as an independent Electoral Commission, noted for its efficiency and the transparency of its dealings, is one other such pillar, President Akufo-Addo noted that the Commission is, predictably, the object of the same anti-democratic attacks as the Judiciary.

“Mercifully for all of us, these attacks have not shaken the confidence of the people in these institutions. Genuine democrats should devote their energies to finding ways and means of strengthening the democratic institutions of our Republic, instead of expending profitless time in undermining them,” he stressed.

President Akufo-Addo, in his remarks, told the gathering that Government has, since his assumption of office, introduced a number of policy measures to help bridge the technology-gap in the administration of justice.

“We have launched the e-justice system, which is designed to leverage technology in the delivery of justice, and we are also addressing the challenge posed by the inadequate numbers of courts in various parts of the country, resulting in citizens travelling long distances to gain access to courts, and, thereby, weakening the rule of law,” he said.

Through the Administrator of the District Assembly Common Fund, Government is constructing one hundred (100) new courts and bungalows for Judges in all sixteen (16) Regions of the country. Sixty percent (60%) of these courts and bungalows have been completed, and will be commissioned before the start of the legal year in October. The remaining forty percent (40%) will be duly completed and commissioned by the end of the first quarter of 2023.

“Six new Regional High Courts are also being constructed in the newly created regions, i.e., Ahafo, Bono East, North East, Oti, Savannah and Western North. Three of the Courts, that is those in Ahafo, Bono East and Oti Regions, will be completed and ready for commissioning, again, before October. The other three, that is those in North East, Savannah and Western North, which are at eighty percent (80%) completion, will be ready for commissioning by the end of the first quarter of 2023,” he said.

A new, modern Court of Appeal complex in Kumasi, together with twenty (20) townhouses and a guesthouse to serve as permanent residences for Court of Appeal Judges based in Kumasi, who will be mandated to handle appeals from the northern sector of the country, will also be completed and commissioned before the end of October.