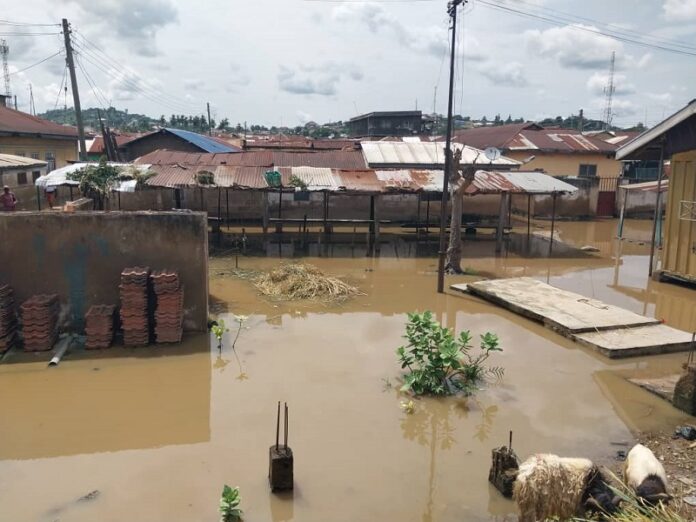 The Member of Parliament for New Juaben North Nana Adjei Boateng has raised concerns about the centralization of hydrological service department in Accra whilst floods continue to devastate communities.

The Hydrological Service Department, an agency under the Ministry of Works and Housing established in 1995 has been highly inefficient due to a multiplicity of factors.

The New Juaben North MP wants the operations of the agency decentralized to work in harmony with stakeholders to deal with the worsening flood situations.

“… so that Hydro can also handle these things. They are not properly decentralized. They are in Accra. I have talked about it several times that if you have a major flooding situation they will say go to the hydro people and where are they, they are in Accra. The road agencies they do their roads and then the drains are put in place, but when you do the road and you put the drains in place without a proper study of the drainage system what do you end up achieving? We don’t achieve much so that is the challenge that we have, we need to be able to address this situation ” the MP lamented.

Hundreds of residents in New Juaben North Municipality in Eastern Regional capital Koforidua are counting their losses a day after the devastating flood which cut off the city by flooding major roads, submerged homes, collapsed houses.

A visit to Akwadum, the worst affected community observed that houses near the Densu river have been submerged, buildings collapsed, shops and sawmill flooded.

At Least 15 houses have collapsed in the community.

The Densu river is however receding very slowly.

Sakina Eliasu and her two old women escaped when their house was submerged and portions collapsed.

“The river has taken away all our household items. Everything is gone. We have two old women here we have moved them to a house of a good Samaritan. Now portions of the house have collapsed. We are distraught and don’t know what to do. We need help”

This is the worst flood caused by overflow of Densu river in Akwadum community since a similar one in 1968.

Currently, the Ghana Water company limited has shut down its dam to avoid collapse to save lives and property.

So far one person has been confirmed dead in the weekend’s flood situation at Sentimental area in Koforidua.

However, many have been traumatized. The losses are huge. Dozens of vehicular engines have been damaged, while some businesses including two filling stations closed down.

The Member of Parliament for New Juaben North also a former Deputy Minister for local government, Nana Adjei Boateng was disturbed after visiting the affected areas and victims.

The MP wants collective effort to deal with situations such as illegal mining and encroachment of waterways worsening flood vulnerability. He urged the assembly to demolish illegal buildings on waterways and wetlands in the municipality.

“we need to pick the bull by the horns otherwise everytime it rains, infact the last time we had this experience it has been quite some times now, and is because the assembly did the dredging but the channel is choked up even now but the volume of water that is coming all the way from the flanks of the ridge and then it flows, is the same problem that we have in Betom is all over so that is one of the things that we should also be looking at maybe together with you and the assembly we will work on it and speak with the appropriate people and see what we can do about the drainage situation here , that is how we can find a long-lasting solution to the problem we have”

The MCE for New Juaben North, Comfort Asante agrees stating that some building owners are already in court fighting the assembly for demolishing their structures.

“tomorrow go to the court and see the number of people because we demolished their structures and they’ve taken the assembly to court, we are working except that we always have to team up and make sure that the right things are put in place because the assembly will never give any permit to somebody to build at flood-prone areas but before you are aware they are there so we come in and our men are always out making sure that people do the right thing and is not an easy job so that’s why we are happy everybody should be onboard”

The MCE said the number of people displaced has increased.

“as at three days ago the number we have had doubled that is why we are going there to make sure the figure reduces during our next MUSEC meeting, but yesterday we met as MUSEC and we’ve put measure in place, they are our people we need to service them to at least feel a bit comfortable”

The Member of Parliament for Suhum, Oboafo Kwadwo Asante,who also visited portions of the affected communities under his constituency is saddened by the development.

He said most of the victims are being sheltered in churches and schools hence will need relief support.

The Eastern regional Director of Ghana Highway Authority Ing. Patrick Okoto suggested the Construction of a massive underground drain at Abrewankwanta roundabout to mitigate the flooding situation after downpour.

The three days of torrential rainfall recorded across the region has led to overflow of major river bodies causing devastating floods in many communities.

About 2000 residents in Nsawam Adoagyiri municipality for instance have been displaced.

Commuters on Otorkpolu to Odumase highway have been using canoe to cross due to overflow of a river.