Is this a debate worth having over the Arsenal star and red-hot Ajax forward?

Ghana are just over a month away from their 2022 World Cup opener with Portugal, but there is a fair bit more optimism in October than there was in March.

The Black Stars had just got the better of fierce rivals Nigeria and were due to return to the quadrennial showpiece after missing out four years back in Russia.

But there was still trepidation in the Ghana ranks, owing to the quality in this iteration — or lack of. Otto Addo received plaudits for finding a way past a talented Super Eagles side, but there was a feeling this team would not have a prayer in Qatar if the squad stayed the same. Fast forward seven months, and there has been an injection of technical quality, with Tariq Lamptey and Inaki Williams switching allegiance from England and Spain, respectively. Mohammed Salisu, after a confusing back and forth that lasted a few years, made his Ghana debut in September’s international break and will be a vital component of Addo’s backline.

Nevertheless, there is a strong feeling these players will not be the Black Stars’ most dependable outlets when they face Portugal, South Korea and the long-awaited Uruguay rematch in Qatar.

Despite the uptick in quality, closer inspection shows Williams is not a natural goalscorer, evidenced by only hitting double figures once in his Athletic Club career. Lamptey has been peripheral at Brighton & Hove Albion in 2022-23, and Salisu — despite the upgrade he offers at centre-back — is too far away from the attacking third to supply or score goals. The obvious choices are Thomas Partey and in-form Mohammed Kudus for varying reasons.

Even if Alfred Schreuder claims he foresaw the youngster’s current form, the young attacking midfielder’s run in front of goal could be likened to a storm appearing suddenly out of a clear blue sky.

“In pre-season, I already saw a good striker in him, but I consciously did not want to reveal that too early,” the 49-year-old tactician said as quoted by Soccer News.“That it comes out like this is great.

“During the period Everton wanted him, I also told him: ‘You are still going to be very important to us’. That has come true.”

Admittedly, Williams has netted one goal each either side of making his debut for the Black Stars, but Kudus’ form in front of goal is opportune for a side whose forwards lack the required productivity in front of goal.

-Cracking strikes,
-expected but equally effective off-the-ball movement in the 18-yard area and
-an overperformance that is likely to prove unsustainable. @GOALAfrica https://t.co/XFErBnc8cl

The Ayew brothers are a lightning rod for that criticism, with Jordan scoring only four times in the last two seasons and a bit in the Premier League. Andre is the natural finisher, by contrast, but the ex-Swansea City forward was a one-goal-in-three man in the Championship, and the Qatar Stars League level is not competitive enough.

Thus, Ghana will be pleased to be beneficiaries of Kudus hitting this rich vein of form leading to the World Cup, even if Addo is unlikely to play the 22-year-old as a central striker at the finals. Despite Kudus’ outstanding form, Partey’s place in the Black Stars team is undisputed.

When news filtered through that the Arsenal midfielder had pulled out during the warm-up before facing Brazil, there was palpable anxiety over what was to ensue in Le Havre.

The former Atletico Madrid man is the only one in this Ghana side of genuine world-class quality, and losing him saw their already slim hopes diminish significantly.

Admittedly, facing arguably the World Cup favourites with the Arsenal star was no guarantee of success, Partey’s superior technical level and understanding of the several phases of play would have helped the West African nation in that 3-0 loss. Injuries have not been kind to Ghana’s best player since departing Madrid, and it is not only the Gooners hoping the 29-year-old stays fit in the short and long term.

None of Portugal, South Korea and Uruguay is at Brazil’s level, but the Black Stars still face the challenging task of navigating a group many are not giving any chance of making it out from.

While advancing is not set in stone with their top midfielder, those chances fall off a cliff without the Arsenal midfielder.

Kudus is stealing the spotlight, but Partey is undoubtedly Ghana’s man for all seasons. 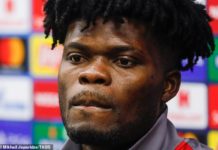 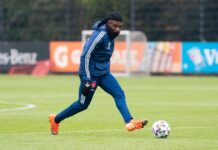