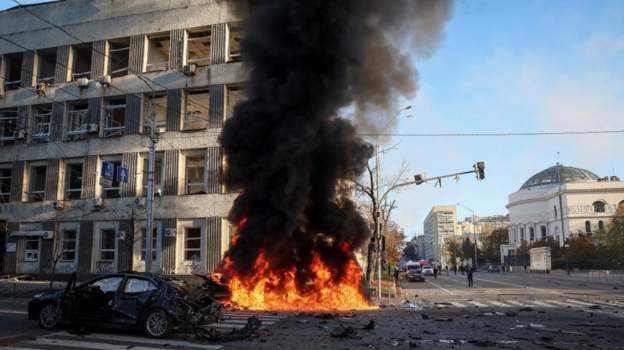 This wave of missile strikes comes after a hugely humiliating event on Saturday when the bridge linking Crimea to Russia was targeted and blown up.

It was extremely humiliating to Putin – it came right after his birthday – so he was under pressure to respond. He could not afford to look weak.

Ukraine’s key cities have been targeted. We don’t really know the whole scale of the damage caused or the exact death toll but clearly this is hugely devastating to Ukraine.

Russian troops have been retreating on the battlefield and this puts President Putin under a lot of pressure domestically from hardliners. Without being able to achieve much progress on the battlefield, this is how he’s responding.

These missiles are relatively easy to launch but very difficult to intercept, so he went for the easiest option, for a very visual option. It’s no coincidence that Russian TV has been showing the impact caused by these strikes, as if to say “we’re still in control, we’re still dominant, this is what we can do”.

We’ve heard of power outages and communication problems. The weather in Ukraine is getting colder, so this will have a dramatic impact on the morale of ordinary Ukrainians. We’ve seen a lot of strikes on the roads during rush hour in Ukrainian cities, so this seems to be part of Putin’s calculus as well.