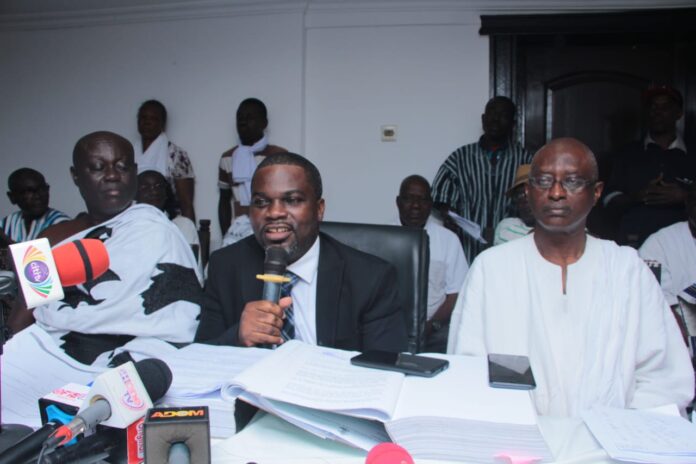 The defense counsel in the Okuapeman Chieftaincy dispute case has stated categorically that, the Judicial Committee of the National House of Chiefs did not direct for restart of nomination and enstoolment of new Okuapehene.

Addressing the media at the Chief’s Palace of Okuapehene to correct what he calls deliberate misinterpretation and distortions of the judgements of both Judicial Committee of the Eastern Regional House of Chiefs and the National House of Chiefs by the petitioners, Lawyer Augustine Asarfo Adjei stated that no portion of the judgement called for restart of the nomination processes.

He said the Okuapehene Oseadeeyo Kwasi Akuffo III is and has not been party to the suit throughout hence the judgement delivered on September 29, 2022, on suit entitled Nana Afua Obuo Nketiaa II and 3 others vs. Lilly Agyemang with suit Number NHC/1/E1/2020 by the judicial committee of the National House of Chiefs does not bind him.

The Lawyer said the respondent Lilly Agyemang, Abrewatia of the Sakyiabea Royal Family accepts that there are three Royal Houses namely: Nketia House, Ama Ogyaa House, and Sakyiabea House that can ascend to the Ofori Kuma stool and that has been codified under the declaration of the customary law (Akuapem State) order, 1960, L.I. 32. The L.I. further provided that these three houses ascend on a rotational basis and when it is a house’s turn, it is that house that nominates.

He continued however that, the “Queenmother Nana Obuo Nketiaa II and her associates felt that it was for the Queen mother usurped that right of our client even after having got the current chief’s name from our client, presented Odehye kwasi Akuffo as the Queen mothers nominee to the kingmakers”.

This compelled the Abrewatia to initiate a suit at the judicial committee of the Eastern Regional House of Chiefs in 2019 to set the record straight that pursuant to L.I. 32 and the customs of Okuapeman, it is not the preserve of the Queenmother to solely nominate the Okuapehene which the Judicial committee upheld and entered a judgement in her favour on April 30, 2020.

Counsel for the petitioners, Lawyer Ansa Asare upon early arrival in Akropong together with jubilating supporters of the petitioners Thursday evening of September 29,2022 told journalists that “The Judicial committee of the National House of Chiefs said the Okuapehemaa should take the necessary step to install Okuapehene”.

He described as just a rumour claim that their petition has been thrown out.

“what the National House of Chiefs decided was that since the Eastern Regional House of chiefs said because there was not sufficient consultation in the selection and ultimate enstoolment of Okuapehene they should go back and make sure that’s all the senior female elders of the Sakyiabea must select candidates or a candidate present to Asonahene who will then pass it on to Okuapehemaa to make the pronouncement. So we promise you by Christmas there will be Okuapehene”.

However addressing the media Friday, September 30, 2022, the defense counsel Augustine Asafo Adjei questioned that,” how can those whose case has been dismissed and have been mulcted with cost, still have the guts to claim that they have won the case at the National House of Chiefs”.

Lawyer Augustine Asafo Adjei maintained that the judgement was unambiguous hence must not be misinterpreted by the petitioners.

“Let peace reign after the judgement of the judicial committee of the National House of Chiefs. Let the insults and insinuations cease. The judgment is clear and nowhere in the judgment did it call for a restart of the nomination processes. It required that custom is followed. So far as our client is concerned, custom has been followed and Akuapem has A King now who was not installed by our client. Note our client is not a kingmaker. Her only role is to nominate within the tenets of L.I. 32.
We hope this would settle the deliberate misinterpretation and distortion of the judgment of both the judicial committee of the Eastern Regional House of Chiefs”

Although there is relative calm, there is a heavy presence of security at Akropong Akuapem to maintain law and order following the judgement by the National House of Chiefs. 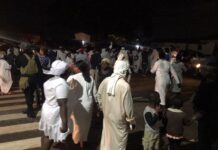 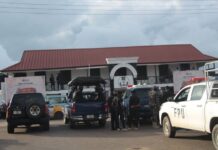 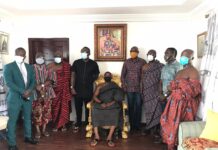