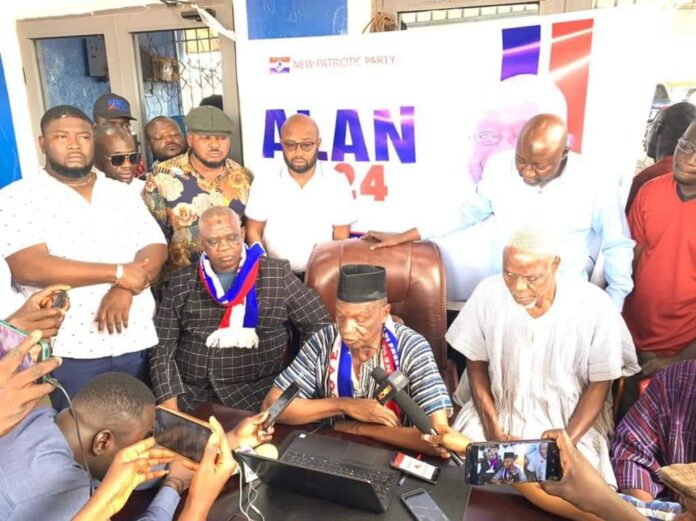 A cross-section of members of the New Patriotic Party (NPP) in the Northern Region have taken a swipe at Vice President Dr Mahamud Bawumia over a foul attempt to steal-start campaigning for his personal political ambition at the expense of the state.

The group made these comments at a press conference held in Tamale on Thursday, October 6, 2022.

The group accused Dr Bawumia of using tribal and religious language in his political message. According to the group, the Vice President’s comments about him having been used by the NPP is in bad taste and have the potential to disunite the party.

Below is their official statement

THE VICE PRESIDENT, H.E. DR. ALHAJI MAHAMUDU BAWUMIA IS OPENLY CAMPAIGNING IN THE NORTH, IN CONTRAVENTION TO THE RULES AND ETHICS OF THE PARTY

Ladies and Gentlemen of the Media, we are grateful to you for honouring our invitation to this forum of the group affiliated with the Alan Kyerematen project for his bid to win the flagbearership position to lead the party into the 2024 polls.

Ladies and Gentlemen, it is indeed, worrying that H.E. Dr Mahamud Bawumia has snubbed the National Council directives, rules and ethics of the party and has set a very bad and dangerous precedent by flagrantly breaching the rules and ethics of the party regarding the conduct of Party Delegate Conferences and campaigns. Because Dr Bawumia is aware of these rules and ethics, he is doing the campaign under the guise of an official tour of the Region. Can H.E.Dr Bawumia tell us, specifically, the purpose of this tour other than the prosecution of his campaign programme to whip up support from the delegates to fulfil his flag bearership bid? What is more dangerous and destructive to the party is his campaign message to the delegates to see him as the only hope of Northerners in the NPP.

He has told the delegates that he has been used by the party to do the “Dirty Job” of the party, which the Akans would not do, but push the Northerners to do. In other words, the vice president is deliberately whipping up hatred for the Akans and other non-Northern tribes in the party. In fact, the vice president is on a tour to play on the emotions and sensibilities of the delegates, using Tribal Bigotry, Regional and Religious sentiments to drive home his campaign message, which is aimed at winning the sympathy of the Northern delegates to vote for him in the upcoming internal exercise to choose a flagbearer who would lead the party in the 2024 General Elections.

Ladies and Gentlemen of the media, we are privy to another disturbing information regarding the arrangements of the conduct of the Special Voting, that, Dr Bawumia’s team has planned very dangerous and unacceptable moves to have him win at all cost on the Special Voting Day. We view these underground arrangements as acts of provocation, which have the potential to bring about chaos and mayhem in the region. We have vowed to resist this by any means and form to ensure an even playing field for all contestants in the race.

We are aware that, their ugly strategy has started with intimidation of Government appointees that those who do not support and campaign for Dr Bawumia will lose their jobs/appointments if any of them fail to preach the “Dr Bawumia for flagbearer by all means” message to the delegates in their respective areas. They have already started this strategy on this tour.

Ladies and Gentlemen, the team that is following Dr Bawumia on his campaign tour comprised about 32 Ministers/Appointees and almost all the MMDCEs moving around in at least 30 v8 cross-country vehicles is suggestive of how Dr Bawumia would exploit his incumbency for his flagbearer contest.

Ladies and Gentlemen, we want to state unambiguously that, the NPP is a broad-based national party, which has no room for tribal bigotry, Regional and Religious considerations. All that the party stands for is competence and good governance to the good people of Ghana. We want Dr. Bawumia and his Cohorts to know that what they are doing is certainly making the party to become unattractive to all and sundry.

And we, the Alan group have resolved to counter any move by any person or group who would try to sink the party and drown it on the altar of parochial considerations. We love NPP and will do all within our strength to keep the party sustained and attractive. We will not sit idly by and allow any person to lead the party on the fast lane to self-destruction.

Thank You. And, May the Almighty God bless you for honouring our invitation.