Sarkodie has shared the full tracklist of his new album “JAMZ”, including additional details about guest artistes and producers.

After months of anticipation, the multiple-awarding Tema-based rapper revealed the final track titles in the afternoon of Monday (November 7), including “Labadi,” which features King Promise. He announced the album at the beginning of September with an official teaser video that captures his early beginnings as a musician and his current status as a mainstream artist.

“As far back as I can remember, I always wanted to rap. I fell in love with this art form as a youth. Growing up in Tema gave me a lot to talk about, and I always had an idea about the kind of career I wanted, so I had to stay true to myself. My second album is already 10 years old, and I am on my 8th album, still doing it my way. It takes a lot to stay motivated, but you can’t be in a rush to skip the process, you still have to deal with everything that comes with it.”

Sarkodie’s highly danceable tracks have made him an ambassador of hiplife, a hybrid genre that combines hip-hop with the highlife sounds native to his home country. 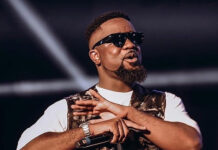