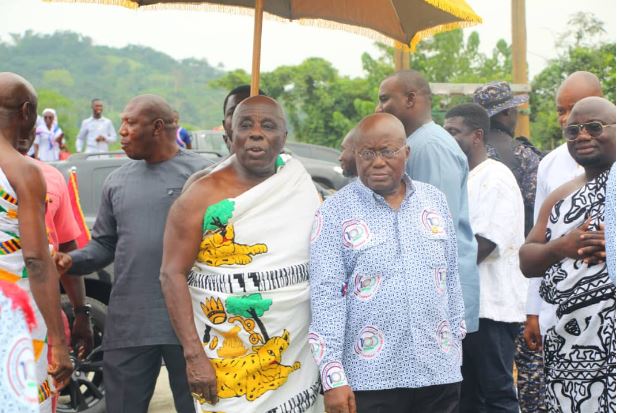 Addressing congregants at the centenary celebration of Akyem Abuakwa Presbytery of The Presbyterian Church of Ghana, Okyenhene Osagyefuo Amoatia Ofori Panin explained late Nana Sir Ofori Atta who was a staunch Christian and Presbyterian wanted to build a temple for God having stopped the persecution of Christians in the traditional area.

This, he says is heartwarming that a great-grandson of Nana Sir Ofori Atta (President Akufo Addo) is also pursuing similar love for God’s work and fulfilling the wish of his late grandfather by building a house for God (Cathedral) at this particular time.

He said the whole arrangement happening at the back of the centenary celebration of Akyem Abuakwa Presbytery of the Presbyterian Church of Ghana at a time grandsons of Nana Sir Ofori Atta – he (Okyenhene) as overlord of Akyem Abuakwa, whilst Akufo Addo is President of Ghana and Ken Ofori Atta as Finance Minister are at the helm, is divine.

“Hundred years later, the grandson of Nana Ofori Atta (Akufo Addo) is President of the Republic of Ghana. More surprisingly, the President’s brother’s son is also the Finance Minister. So it is a divine arrangement that God has made for us to contribute to the development of the country”.

Okyenhene continued, “It is same perseverance that President Akufo Addo is pursuing to build a house for Ghana to the glory of God. A vision that came to man through God …He said I will build a house for God. Historically, someone met Nana Ofori Atta and said you are the only Christian King in Akyem Abuakwa, you must leave a legacy. Nana Ofori Atta then promised to build a temple in Kyebi. So if President Akufo Addo is building a temple (Cathedral) in Accra, let’s assume it is in fulfillment of the promise made by Nana Ofori Atta” Okyenhene Osagyefuo Amoatia Ofori Panin said.

Okyenhene reiterated and justified his decision in 2019 declaring “Okyeman for Christ” as a pursuit to honour God for how far he has brought Okyeman.

“I stand here to boldly declare Akyem Abuakwa is solely for Christ.”

Okyenhene said this Sunday, November 20, 2022, when addressing congregants at the climax of the Centenary celebration of Akyem Abuakwa Presbytery of the Presbyterian Church of Ghana at Kyebi in the Eastern region.

Presbyterian Church missionaries in Akyem Abuakwa in the 1800’s faced persecution by then Okyenhene Amoako Atta I over Christianization and the abolition of slavery which he says was causing him to lose his source of power and revenue.

Nonetheless, Odehyee Susana Gyankroma, a royal at Kyebi accepted Christ and was baptized together with her husband Okyerema Yaw Boakye, who was a drummer at the then Okyenhene’s palace in 1876.

Having been baptized into the Presbyterian faith, the couple thus became missionaries winning souls for Christ, as a result, they were banished from Akyem Abuakwa and suffered persecution for standing for the faith.

As the persecution festered, the couple lost their four-month-old baby who fell from the back of her mother whilst escaping on foot from their persecutors at Akyem Asuom.

Odehyee Gyankroma was the mother of Nana Sir Ofori Atta, a late Okyenhene, who gave birth to Paa Willie, a Ghanaian political doyen and Mrs Adeline Yeboakua Akufo-Addo, the former first lady of Ghana and mother of President Akufo-Addo.

Nana Sir Ofori Atta, after ascending the stool as Okyenhene in 1912 leveraged on his Christian faith and power as a traditional ruler to help the Presbyterian Church blossom in Akyem Abuakwa.

Addressing the congregants, President Akufo Addo stated that, he is inspired that “our great grandparents Akua Gyankroma and his husband Yaw Boakye thought us one thing that still remains dear to my heart. If you have faith in God and lean on Him, whatever any man will do or say about you will never come to pass.Just continue to hold on to your faith for there is light after the tunnel. That is what we are all witnessing today”

President Akufo Addo assured Ghanaians that the current economic hardship will soon be over due to various policy interventions being implemented by government.

Ministering at the service, Moderator of the General Assembly of the Presbyterian Church, Rev Prof.Joseph Obiri Yeboah Mante said the crucifixion of Jesus Christ despite his good works on earth epitomizes that not all human beings will appreciate what leaders do therefore every leader must rather focus on God to do things that please Him(God), not mankind.

The Moderator eulogized the late Okyenhene Nana Sir Ofori Atta for his vital role in accepting Christianity to Akyem Abuakwa and helping the Presbyterian Church grow despite opposition and persecution of the Church by his predecessor.

The Chairperson of Akyem Abuakwa Presbytery of Presbyterian Church, Ghana Rev. Dr. Seth Kissi together with the Moderator presented honours to some individuals who have contributed to the growth of the Presbytery.

President Akufo Addo joined Okyenhene and leaders of the Church to commission and dedicate a centenary office Complex.