At his Florida estate, he said: “We have to save our country.”

Mr Trump’s announcement comes as some fellow Republicans blame him for the party’s lacklustre performance in last week’s midterm elections.

President Joe Biden, who defeated Mr Trump two years ago, has said he may run for re-election in 2024.

Speaking to an invited crowd from the ballroom of his Mar-a-Lago private club in Palm Beach on Tuesday night, Mr Trump, 76, said: “We are a nation in decline.

“For millions of Americans, the past two years under Joe Biden have been a time of pain, hardship, anxiety and despair.”

He continued: “In order to make America great and glorious again, I am tonight announcing my candidacy for president of the United States.”

Shortly before the speech, he filed paperwork with the Federal Election Commission formally declaring his presidential candidacy and setting up a fundraising account.

Mr Trump’s speech lasted for more than an hour and touched on many of the same themes he has been repeating on stage for months.

These included border security, energy independence and crime, as well as attacks on Mr Biden’s record in office.

His wife, Melania Trump, joined him on stage at the end of the speech. But there were fewer family members present than at some of his past events and Ivanka Trump and Donald Jr did not attend.

“No, not really,” the Democratic president said. Last week, he was filmed laughing when a reporter suggested Mr Trump’s support base remained strong.

Mr Trump’s unusually early declaration for the election of 5 November 2024 is being seen as a tactic to steal a march on potential rivals for the Republicans’ White House nomination.

Although Mr Trump is the first to enter the race and instantly becomes the front-runner, he is expected to face challengers.

They may include his own former Vice-President Mike Pence, 63, and rising star Florida Governor Ron DeSantis, 44.

In Tuesday’s remarks, Mr Trump largely steered clear of rehashing his baseless claims that the 2020 election was stolen from him by mass voter fraud.

He left office after one term in 2021, refusing to acknowledge his defeat by seven million votes.

His debunked conspiracy theories riled up supporters who rioted at Capitol Hill in the final days of his presidency as lawmakers met to certify President Biden’s victory.

Mr Trump became the first president ever to be impeached twice, although congressional Democrats were thwarted in their bid to remove him from office by Senate Republicans.

He ploughed ahead with his announcement on Tuesday despite pleas from advisers to postpone until after a run-off election for a Senate seat in Georgia next month, amid fears his candidacy could prove too much of a distraction.

Some conservatives have blamed Mr Trump for the Republicans’ failure to achieve sweeping victories in last week’s midterm elections.

The party is on the verge of holding power in the US House of Representatives, but it would be by a razor-thin margin.

Meanwhile, Democrats have retained control of the Senate and may even bolster their majority after the December run-off in Georgia.

Candidates he supported in key states such as Pennsylvania, Arizona and Michigan were defeated after echoing his election conspiracies, while others won in Ohio, Wisconsin and North Carolina.

Mr Trump’s White House bid comes as he is investigated on several fronts, including a justice department investigation into the removal of files marked classified from the White House to Mar-a-Lago at the end of his presidency.

He is admired by conservatives for installing three Supreme Court justices and enacting sweeping tax cuts, as well as presiding over a Middle East peace deal and the killing of Islamic State’s leader.

But America’s divisions widened during his four tumultuous years in office as he was accused of governing by tweet, equivocating over far-right violence, a chaotic response to the coronavirus pandemic, and alienating US allies with his “America First” policy. 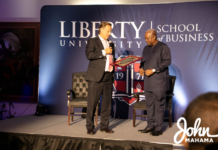 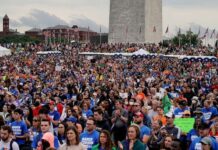 Tens of thousands rally for stricter US gun laws