The Ghana Integrity Initiative, the local Chapter of Transparency International, has joined a number of Ghanaians and institutions, who have commended the Vice President, Dr. Mahamudu Bawumia, for his swift and emphatic response.

The development follows attempt by immediate past Minister of State at the Ministry of Finance, Charles Adu Boahene to allegedly extort money from investors with his name.

On Monday morning, investigative journalist, Anas Aremeyao Anas, published a teaser of an undercover investigation, in which sacked Minister of State at the Ministry of Finance, Charles Adu Boahene, was captured discussing business deals with some disguised businessmen in Dubai.

In the video, the Minister was also captured asking for $200,000 Dollars from the businessmen, which he described as ‘appearance fee’ in order to set up a meeting for the businessmen to meet with the Vice President.

Following the publication of aspects of the investigation on Monday morning, Vice President Bawumia, swiftly took to his Facebook page to flatly deny knowledge of any arrangement with the Minister, and called for his immediate dismissal and investigations (if what Anas had published is truly captured in the video).

Shortly after the Vice President’s denial and call for the Minister to be dismissed and investigated, a statement from the Presidemt announced the dismissal of the Minister and referred him to the Special Prosecutor.

“I believe that what he has done as a first step, is good,” she told host, Umaru Sanda Amadu, adding that there should be further investigations.

In Dr. Bawumia’s strongly-worded Facebook post, he also called for further investigations, and the President, perhaps heeded to the call of his Vice, as Charles Adu Boahene, has also been referred to the Special Prosecutor, a development the Programmes Manager of Ghana Integrity Initiative also lauded, and called for its continuation.

“We will say that the President acting swiftly is critical to the impression people form in the fight against corruption. If you remember we have said in the past that some of these issues happen and not much action is taken; it fuels the perception around corruption in government,” Mary Ada said.

“It is good that he has referred it to the Special Prosecutor and we believe that it should go beyond that.”

Asked whether her outfit had issues with the Vice President’s name being mentioned, or his response, the Ghana Integrity Initiative Programmes Manager said no.

“No we are not condemning the Vice President in anyway,” she said, stressing rather on the need for investigations on Charles Adu Boahene.

“We believe that so far as allegations have been made, perhaps, let us finish watching the video and perhaps, we will have something more concrete to stand on.”

“For now, the Vice President has come out that he has no knowledge of what is happening and if anybody is using his name to peddle influence and also take bribes, the person should be dealt with appropriately.”

A number of Ghanaians, including media personalities, officials of civil society groups and members of the general public have hailed Dr. Bawumia’s strongly-worded statement on his Facebook wall which responded to the publication by Anas ahead of the public screening of the documentary later Monday evening. 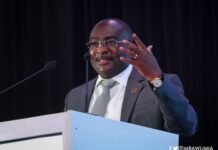 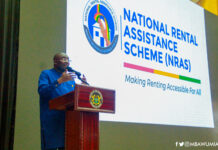 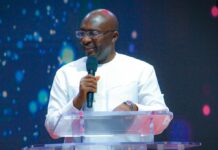