A court in Nigeria has sentenced the police chief to three months in prison for disobeying an earlier order to reinstate an officer who has waged a lengthy battle to get back his job.

Patrick Okoli has been fighting his forced retirement since 1992.

He finally won in 2011, when a court ordered his reinstatement.

But with the order not heeded, the High Court has now come down hard on the police chief, Inspector General Usman Alkali Baba.

It has ruled that he should either go to jail for contempt of court or reinstate the officer.

It is unclear how old Mr Okoli now is or what the reason was for, what a judge called, his “unlawful retirement”.

In his reaction to the ruling, police spokesman Olumuyiwa Adejobi said that “it was astonishing to hear” about his boss’s sentencing given he became head of the force in 2021 – nearly three decades after Mr Okoli was “dismissed”.

The police force was studying the ruling, before deciding on what action to take, he added.

“It is instructive to note that the case in point concerns an officer who was dismissed as far back as 1992, a few years after the current IGP joined the Nigeria Police Force,” Mr Aejobi said. 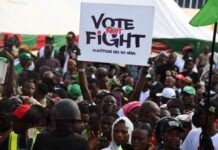