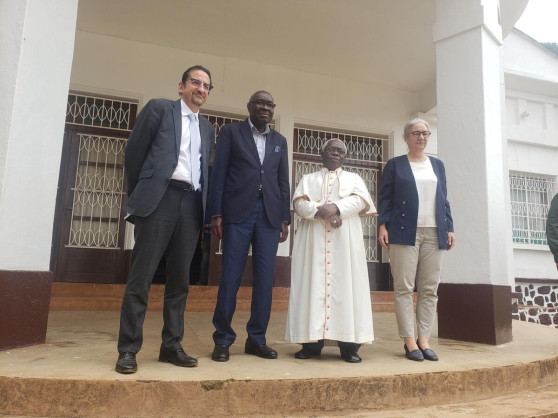 The two deputy special representatives of the UN Secretary General in the DRC, Khassim Diagne, in charge of protection and operations, and Bruno Lemarquis, humanitarian and resident coordinator, were on mission to South Kivu province late September.

In Bukavu, MM. Diagne and Lemarquis met the Deputy Provincial Governor, Marc Malago Kashekere, with whom they discussed future relations between the Congolese government and MONUSCO, as well as the stabilization of the province and the issues of the Disarmament, Demobilization, Community Recovery and Stabilization program (PDDRC-S).

Mr. Malago highlighted that this meeting, “very constructive one” according to him, augurs “the continuation of relations binding the province and MONUSCO and is an indication that the transition we wish to be peaceful will indeed take place in the best conditions“.

After the visit to the governorate, the two UN officials went to the archdiocese of Bukavu where they spoke with the head of the Catholic Church in South Kivu, Monsignor Francois-Xavier Maroy.

Pleased with this visit, which enabled the Church to express its point of view on the most topical issues, the Catholic prelate nevertheless did not fail to challenge the two representatives of the international community in the country on their resolute commitment to peace, “because Congo is the future of humanity”, he said.

He also challenged the Congolese leaders underscoring “that they must work hard to help the population be happy and able to live as human beings“.

For a dignified withdrawal of MONUSCO

In Uvira, the second leg of his trip, Deputy Special Representative Khassim Diagne discussed with the political and military authorities, in particular with the mayor of the city, the commander of the operational sector Sokola II, but also with representatives of civil society.

He took this opportunity to thank the authorities for their commitment which made it possible to restore calm to the province during the period of crisis in July and August 2022. He declared that MONUSCO is always ready to assist the Congolese government in reinforcing the protection of civilians.

“I Lam leaving completely satisfied with the availability and commitment of the civil, political, and military authorities I have met. The big challenge we have, and it is a joint challenge with the Congolese authorities, is the communication gap that I believe we will have to fill. We will try to respond a little more precisely and clearly to the expectations of the population,” he said.

With members of the civil society, the deputy head of MONUSCO interacted for more than three hours to allow everyone not only to express themselves freely, but also to understand the context of the preparations for the transition of MONUSCO .

Mrs. Annie Tabisha, a woman leader in the region, expressed the wish to see MONUSCO’s transition plan be “translated into local languages ​​so that the population at a low level can better understand what MONUSCO’s mandate is“.

“It will help us to improve things and to move forward during this transitional period,” she pleaded.

For his part, the leader of the citizen movement LUCHA, Faustin Igilima, insisted on a dignified withdrawal of MONUSCO.

“We recommend a local strategy to support the transition for MONUSCO’s exit. The youth as well as civil society should work continually to discuss this dignified exit of MONUSCO from the DRC”, he said.

As for the coordinator of civil society, Kelvin Bwija, he insisted on MONUSCO’s support to the FARDC in the high and medium plateaus of Uvira and Fizi/Itombwe.

“For a FARDC soldier who must move from Uvira to Bijombo or to Minembwe on foot, it is a bit difficult. As we still have the presence of MONUSCO here in the DRC, it is really a relief for the peaceful Congolese citizens who badly need security. Therefore, we are requesting MONUSCO to collaborate and support our security forces logistically,” he said.

The UN delegation said it was satisfied with this meeting, which opens a new path for dialogue with the local population. Khassim Diagne specified that a permanent consultation framework has been set up, and it could be open to civil society in Baraka/Fizi to discuss the transition process.

Precisely in Baraka, where the deputy heads of MONUSCO began their journey, they also met the various local actors, in particular the mayor of the city, the politico-military authorities but also the members of civil society whose concerns are not no different from those in Uvira.

For his part, the deputy special representative and humanitarian coordinator Bruno Lemarquis took advantage of his stay in Bukavu to meet the humanitarian workers. The objective of the meeting was to identify the challenges and opportunities in South Kivu for stabilization and, especially to support the operationalization of the PDDRC-S.

Together, they analyzed strategies for collaboration with state parties and especially for capitalizing on lessons learned during previous interventions.

The Deputy Special Representative of MONUSCO and Humanitarian Coordinator called on the partners to put the PDDRC-S at the center stage of all their interventions, ” because it is key to all stabilization efforts both in South Kivu and throughout the eastern part of the country”.

Finally, before leaving Bukavu with his colleague Khassim Diagne, Mr. Lemarquis met journalists at MONUSCO headquarters. He spoke to them about the humanitarian situation in South Kivu and in the DRC in general.

According to the humanitarian coordinator in the DRC, the country has 27 million people who are suffering from malnutrition and 5.5 million who are internally displaced.

To this end, Bruno Lemarquis suggests that “partners serving in the development and humanitarian fields should work in a coordinated manner with the provincial authorities to be able to address some of the root causes of the humanitarian crisis, for example the issue of conflicts, road infrastructure, agricultural processing, etc. ” he said