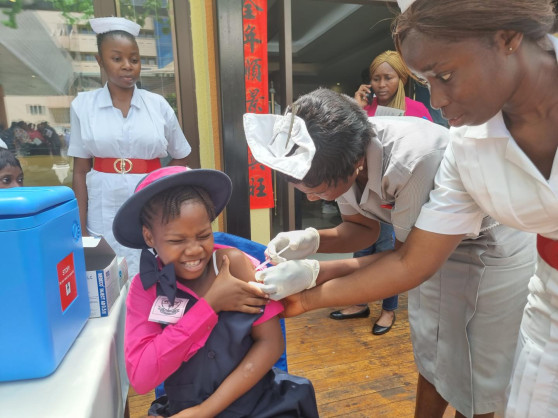 “People are dying in silence,” says Dr Desmond Maada Kangbai, the head of the country’s immunization services. He explains that most women affected by cervical cancer are not willing to talk about their condition or even present themselves for screening and thus possibly get a diagnosis early enough to change the course of the disease and their life.

“What we do know is that cervical cancer is the leading cause of deaths caused by cancer and the second most common cancer among women in the country,” Dr Kangbai says.

But silence is not the only barrier to cervical cancer care in Sierra Leone. There is a huge lack of public information and awareness about the disease, its prevention and care. Screening sites and health facilities providing cancer care are not available in much of the country.

“I didn’t know about cervical cancer until when I was recently trained to support my school ahead of the introduction of the HPV vaccine,”, says Fatmata Yegbeh Kargbo, a teacher in the northern Koinadugu District.

Breast cancer accounts for the highest burden of cancer among women aged 14–44 years in Sierra Leone. Cervical cancer is not far behind. Every year, more than 500 new cases emerge in the country, and an estimated 400 women die because of it.

The actual burden and prevalence of the disease are based on estimation due to the tight-lips culture among affected women in talking about that part of their body affected by the cancer, says Dr Kangbai. Care-seeking for the symptoms is very low as it is with the services.

The Government has decided the best defence against the silence is to go on the offensive with escalated attention to prevention – and long before the disease has a chance to strike. On 3 October the country introduced the vaccine that is typically given to girls before they reach puberty and that protects against the human papillomavirus, or HPV, which causes cervical cancer.

“As a country, we want to focus on the primary preventive measures of cervical cancer because we know treatment is very expensive,” Dr Kangbai says.

The HPV vaccine is given to girls at an early age to protect them before they are exposed to the disease, which is transmitted through unprotected sex.

The vaccine introduction into the country’s routine immunization system is funded by Gavi, the Vaccine Alliance, with technical and operational assistance from World Health Organization (WHO) and UNICEF.

For the introduction, all girls aged 10 years will receive the first dose of the vaccine, at approximately 154 000 girls. In six months, they will receive the second dose to ensure full protection.

According to the national health authorities, the vaccine will be available to girls aged 9–15 years from 2023 onwards. The goal is the elimination of the disease in the country.

“We are in the era where no one should suffer or die from diseases that are preventable with the use of vaccines”, says Dr Steven Velabo Shongwe, WHO Representative in Sierra Leone. “And, as we make these lifesaving services accessible to safeguard the health of women and girls, we are also contributing to empowering the individual, the community, as well as enhancing the sustainable social and economic development of the nation.”

Public education has been intensified to raise awareness on the cause of the disease and services that are available including the HPV vaccine now being introduced, as well as the limited screening sites and the treatment options for women suffering from the disease.

Partnership between health and education sectors to reach all girls

Sierra Leone’s health authorities are collaborating closely with their counterparts in the education sector by using school and community-based vaccination strategies to introduce the HPV vaccine from 3 to 9 October. More than 1,400 teams of health workers, community mobilizers, school authorities and teachers have been trained to facilitate successful implementation of the vaccination, promote the importance of the vaccine, and to ensure all eligible girls in and out of school are reached.

“We urge the authorities and parents to ensure that their girls are protected against the distress of cervical cancer by protecting them against HPV at an early age,” Dr Shongwe implores.

With this introduction, Sierra Leone becomes the 122 WHO Member States globally as of March 2022, and the 18th country in Africa to include the HPV vaccine into its routine immunization system.