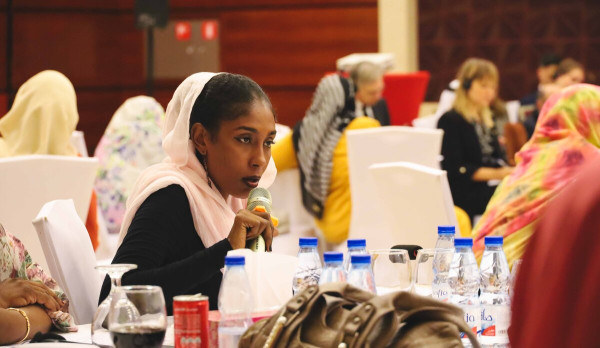 Forty women from civil society organizations, women’s groups, political parties, armed movements, and academia came together over two weeks and produced a joint gender-responsive constitutional vision in a series of workshops organized by UNITAMS in close collaboration with UNDP. The women presented today to the Trilateral Mechanism and representatives of the diplomatic community an outcome document consisting of guiding principles and key clauses to be included in any upcoming constitutional document to ensure women’s rights and meaningful participation in Sudan. “Recognizing the role of women and their meaningful participation in the success of the revolution, we affirm our commitment to the principles of gender equality in all aspects of political, economic, social, cultural, developmental and environmental spheres,” the women stated in the preamble of their proposal.

The constitutional vision is guided by the principles of human rights, non-discrimination, equal citizenship, the rule of law, and the link between gender equality and democracy. The outcome document also proposes a set of clauses to ensure women’s equal participation in governance structures, legislative bodies, law enforcement and the judiciary as well as policy-making forums during and after the transition. Clauses are also proposed to ensure national laws are consistent with international standards to protect against gender-based violence including domestic violence, female genital mutilation, human trafficking and child marriage. Other provisions focus on ensuring women’s equal right to land ownership, to pass down citizenship, and to access justice equitably.

“We don’t see many women in the leadership of the political parties, armed movements, and political groups that we engage every day. But what is clear today is that there are women who can play leadership roles across the spectrum,” said Volker Perthes, the Special Representative of the Secretary-General for Sudan, “Designating quotas for women’s participation is one thing, but just as important is ensuring that women’s participation is meaningful.”

Diplomats and the Trilateral Mechanism discussed with the women how to support their leadership in claiming their rightful space in any upcoming constitution drafting process and in Sudan’s political future.