Facebook has been accused by the European Commission of misleading it during its investigation of the company’s 2014 takeover of WhatsApp.

The Commission says it was misled when Facebook said it was impossible to match users’ Facebook and WhatsApp accounts.

But in August, WhatsApp said it would do just that, by linking users’ phone numbers with their Facebook identities.

Facebook said it had nothing to hide and had acted in good faith.

The Commission believes the ability to link the accounts of the two services’ users must have existed in 2014, though this is vigorously disputed by Facebook.

If the Commission concludes that it was definitely misled, either by accident or design, it could fine Facebook up to 1% of its turnover, which would amount to hundreds of millions of euros.

“Companies are obliged to give the Commission accurate information during merger investigations,” said Commissioner Margrethe Vestager, who is in charge of competition policy,

“In this specific case, the Commission’s preliminary view is that Facebook gave us incorrect or misleading information during the investigation into its acquisition of WhatsApp.”

For its part, it says that it was only very early this year that it found a way to establish a link with the accounts of WhatsApp users, via their phone numbers.

And even so, Facebook says in fact it still cannot match accounts with the precision needed for full “cross-platform messaging”, which it argues was the Commission’s main concern back in 2014.

“We’ve consistently provided accurate information about our technical capabilities and plans, including in submissions about the WhatsApp acquisition and in voluntary briefings before WhatsApp’s privacy policy update this year,” said a Facebook spokesman.

“We’re pleased that the Commission stands by its clearance decision, and we will continue to cooperate and share information officials need to resolve their questions,” he added.

The Commission said its new probe would not undermine its previous decision to approve the $19bn (£16bn) merger of the two companies because it had not relied on the misleading information alone to approve the deal.

When WhatsApp announced its new policy in August, it justified it by saying this would lead to an improved service, such as providing “more relevant” friend suggestions, letting businesses send adverts directly to users, and also by dealing more effectively with spam and abuse.

But the change has come under scrutiny from regulators across Europe.

The day after the new policy was announced, the UK’s Information Commissioner (ICO) launched an immediate investigation to see if the alteration broke the UK’s data protection laws.

In September, the Hamburg Commissioner for Data Protection and Freedom of Information told Facebook to stop collecting and storing the data of German users of WhatsApp.

Then in November the UK’s Information Commissioner followed suit and told Facebook not to use the data it had gathered from its WhatsApp users in the UK, saying the firm had not obtained valid consent for the move. 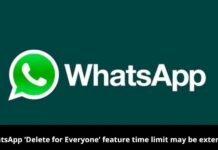 WhatsApp to make changes to the ‘Delete For Everyone’ Feature