Guinea-Bissau produced an inspiring display in their debut outing in the Africa Cup of Nations with a last-ditch goal to draw 2017 hosts Gabon on Saturday.

After an unproductive first 45 minutes, Borussia Dortmund forward Pierre-Emerick Aubameyang scored the first goal of the 2017 Afcon with a close range effort at the Stade l’Amitie in the 52nd minute.

The performance of Spanish coach Antonio Camacho’s men was far from convincing to their very expectant home crowd who had nearly filled the stadium to its full capacity.

Gabon looked to have found comfort in their one-goal lead but they were soon to suffer the consequence as Guinea-Bissau’s Juary Soares grabbed a dramatic late equalizer as he headed home from Zezinho’s free-kick just on the 90th minute mark.

The Panthers will now look to bounce back from the opening day disappointment when they play Burkina Faso in their next game on Wednesday, while the ‘Wild Dogs’ of Guinea-Bissau take on the Indomitable Lions of Cameroon.

Meanwhile, Burkina Faso face Cameroon in the other opening Group A game at 7pm. 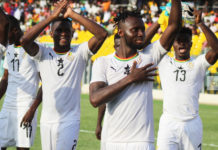 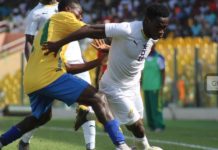 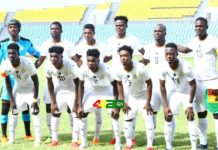