A book of condolence will be opened for Coach Sam Hemans Arday at his father’s residence at house no. A364/4, Ayikoi Teiko Cresent, Lartebiokorshie, from Saturday 18th February 2017.

Coach Arday, affectionately called ‘The Multi System Man’ who was a retired Superintendent of Police died at the age of 71 years old.

He is survived by two children, a son and a daughter.

Funeral arrangements will be announced later. 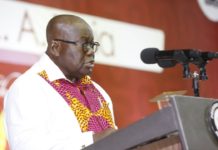