West Blue Consulting, a world class business and IT-consulting and technology firm, has provided a single platform to boost the operation of Courier Services in Ghana.

The platform which forms part of the Pre-Arrival and Assessment Report System (PAARS) of the National Single Window has placed the country’s courier services on the international stage and boosted government revenue figures since last December.

The PAAR is an integrated system which cuts down the human elements, processes and duration of post and cargo clearance in a transparent way which affords all stakeholders an opportunity to know and monitor every stage of the clearance process.

Before West Blue Consulting introduced the concept last December, courier service was a rather tedious task as Customs officers had to manually go through each of the clearance processes including sorting, classification, valuation, examination and it involved a lot of paper works.

The introduction of the PAAR has, however, cut down the entire process and it now takes between 10 to 15 minutes to clear a parcel once all the forms have been correctly filled and bills paid where necessary.

With the PAAR, an importer does not have to be physically present to know what stage an expected cargo has reached as the process at each and every stage could be monitored online once the importer has access to internet services.

It is also now possible for one to know before the arrival of the cargo, what the charges are, pay straight to the banks and then sit home and expect the parcel delivered.

Selected Banks that have approval for the collection of payments from declarants (Ecobank and Ghana Commercial Banks) are also hooked to the system.

The agencies through which the parcels or goods are imported to Ghana (DHL, FEDEX and ARAMEX) are also hooked to the system to allow for easy and efficient work flow.

The system also allows declarants who are not satisfied with charges on their courier goods or parcels to protest and subsequently call for review.

West Blue has provided machines, scanners, laptops and printers among others at the courier services centers at the Kotoka International Airport (KIA) to aid their operations.

The company also provides training workshop for Custom officers and other stakeholders on the efficient use of the system. 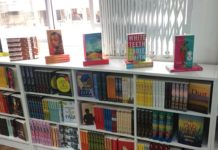