Rogue One actor Riz Ahmed has been made a cover star for Time magazine’s list of the 100 most influential figures in the world.

Ahmed leads the way for the pioneers list, with other categories honouring icons, artists and leaders.

Oscar winners Viola Davis and John Legend are the respective cover stars for icons and artists.

Ed Sheeran and James Corden also made the list, with their tributes written by Taylor Swift and Sir Elton John.

Ahmed’s tribute is written by Hamilton creator Lin-Manuel Miranda. The actor and musician contributed a rap to the Hamilton Mixtape and Miranda explains why he is a named as a pioneer.

“Riz Ahmed has been quietly pursuing every passion and opportunity for many years as an actor (The Road to Guantanamo, Four Lions, Nightcrawler), rapper (Post 9/11 Blues, Englistan) and activist (raising funds for Syrian refugee children, advocating representation at the House of Commons).

“To know him is to be inspired, engaged and ready to create alongside him. The year 2016 was when all the seeds he planted bore glorious fruit, and here’s the best part: he’s just getting started.”

Riz tweeted his thanks to Time and Lin-Manuel for his “love” and “support”, which he said he hopes to earn.

Meryl Streep has written about Viola Davis for the magazine, pointing out her “hard-won, midlife rise to the very top of her profession has not led her to forget the rough trip she took getting there”.

“And that is why she embodies for all women, but especially for women of colour, the high-wire rewards of hard work and a dream, risk and faith.”

Harry Belafonte has written the tribute to John Legend calling him a “wonderful artist” and “remarkable lyricist” and praised his activism.

“John uses his platform to push for meaningful social change, and the depth of his commitment is to be admired,” he writes.

Other stars to make the list are Demi Lovato, Chance the Rapper, Emma Stone and Margot Robbie, whose tribute is written by Martin Scorsese. 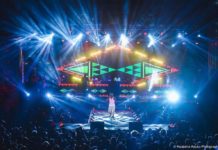 Sarkodie is richest celebrity in Ghana