Ghana’s first satellite dubbed Ghansat-1 was successfully launched into the International Space Station (ISS) by SpaceX, Flight 11 from Kennedy Space Center in Florida-USA on June 10, 2017 and it is expected to be released and deployed into the orbit at an altitude of 420km today, Friday July 7, 2017 at noon.

The process is currently being watched live at JAXA Tsukuba Space Center in Japan and All Nations University Campus in Koforidua.

The successful launch of the satellite has put Ghana on the International Map as the first country in Sub-Saharan Africa to launch academic satellite into space paving way for the country to explore the full benefit of satellite technology.

The satellite built by Students of All Nations University College in Koforidua, Ghana has low and high resolution cameras onboard capable of taking pictures of Ghana and provide data on happenings on Ghana’s coastal areas and the environment.

It also has digi singer SNG mission which can be used to broadcast the National Anthem and other patriotic songs of Ghana from space during national events .

Officials from NASA and other space technologists are currently gathered at the All Nations University College observing the release of the satellite into Orbit.

The release into Orbit of the satellite is being  covered  by both local and international media houses including the BBC. 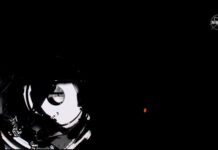