State Attorneys led by the Deputy Attorney General, Godfred Dame, before the end of the last legal year begun an enquiry into how Mr.  Woyome may have used the over 51 million cedis judgment debt paid to him wrongly by the State some six years ago.

The examination also seeks to identify his sources of revenue and properties so the State can recover the monies.

The AG’s department is expected to continue the enquiry before the single Supreme Court Judge, Justice Albert Benin.

Woyome was paid the GHC51 million after suing the over the abrogation of an alleged contract he had with the government for the construction of some stadia for the 2008 Africa Cup of Nations.The Supreme Court, however, ruled subsequently that he got the money illegally. 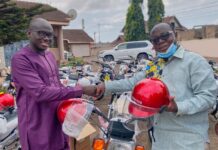