Floyd Mayweather has been  accused of hiring an interior designer to redesign his new Beverly Hills mansion, only to screw them out of $650k owed on the project, The Blast reports.

According to court documents obtained by The Blast, Palumbo Design claims they were hired to be the interior designer and project manager to oversee the complete cosmetic redesign of Mayweather’s newly-purchased Beverly Hills mansion.

Palumbo says they held up their end of the deal by completing work on the home. The company says Mayweather paid over $1m  for their work on the project but claim Mayweather stopped paying and ignored their repeated demands for further payments on the remaining $650,000 owed.

The company claims Mayweather was clearly pleased with the work, pointing to the fact that “he frequently posted pictures on social media for his tens of millions of followers bragging and touring his redesigned home, recently acquired furniture, and other redesign work” that they did.

The company says Mayweather agreed to pay for all furniture, rugs, art, décor, window coverings, textiles, and all other items and furnishings selected, plus pay a pre-tax 25 per cent  design commission.

Around February, while they were working to complete Mayweather’s master bedroom, Palumbo says they were still waiting to be paid on a $150,000 invoice. When they asked his team, they claim they got the runaround and were told to wait to submit another invoice until after “visible progress” had been made on the home or an impressive looking room was finished for Mayweather.

They waited to send the next invoice but they claim no payment was made, despite numerous assurances. Palumbo says they kept working on the home for months and keep asking where the payments were … with no luck.

The head of the company even spoke to Mayweather on the phone and says the boxer never disputed the invoice but apologised, claiming he was dealing with personal matters. His team eventually started questioning them on the cost of work done and items purchased.

Palumbo says they have yet to be paid and are suing for the entire $657,037.36 plus interest owed.

Meanwhile,  Mayweather has finally opened up about his ongoing beef with 50 Cent, according to Capital XTRA.

The professional boxer spoke in a recent interview about his relationship with the rapper after their friendship appeared to have turned sour in recent weeks.

It initially sounded as if Mayweather was ready put their disagreements behind them, saying “I wish 50 nothing but the best, I want him to keep doing what he doing.”

Despite his well wishes, however, the athlete went on to trash the current series of ‘Power’, the TV show 50 executively produces and stars in.

“I watch ‘Power’. Even if he left the show, people still wanna watch the show. But as far as this season, it’s s**t. It’s been garbage,” he said, before adding, “As far as the other seasons, it’s been the best show.” 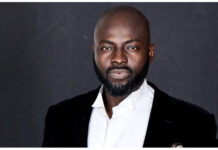 Beverly Hills Plastic Surgeon Dr. Michael K. Obeng to be honored alongside US Congressmen in Washington 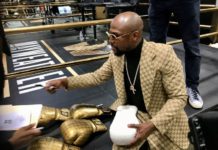 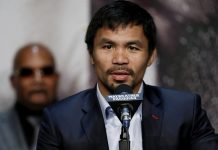