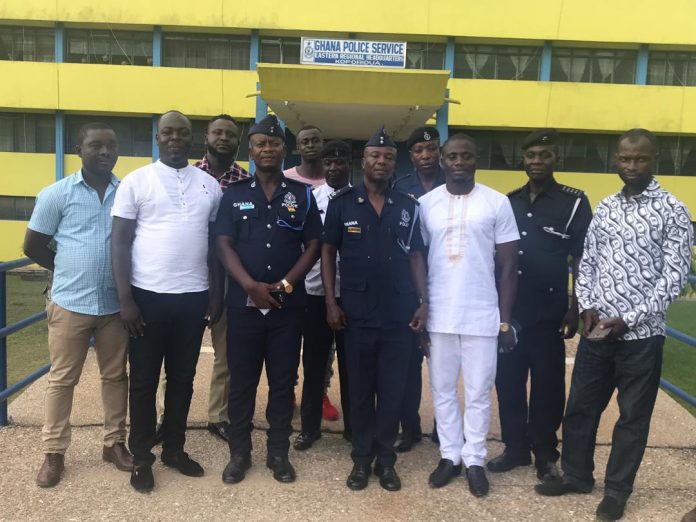 As part of its Corporate Social Responsibility, Management and staff of Mighty Construction Company on Wednesday, November 7, 2018 made a donation of office equipment to the Koforidua Motor Transport and Traffic Unit (MTTD) of the Ghana Police Service in the Eastern Region.

The items donated to the MTTD unit of the Police Service include; four office tables, five office chairs, a fridge, eight curtains set, an air condition and set of stuffing chairs totalling an amount of GH₵ 21,000.

The Managing Director of the company, Mr. Emmanuel Offei–Awuku who made the donation on behalf of the company, commended the police for their support in clamping down on crime in various areas in the region and the country as a whole.

According to Mr. Offei–Awuku, the donation was part of the company’s Corporate Social Responsibilities in fulfilment of a request from the MTTD unit of the Ghana Police Service some days ago to support the department in executing their work diligently.

Speaking to the media after the donation, Mr. Offei-Awuku pleaded with the Police Administration in the country to be more vigilant on suspected criminals especially within populated areas in the country assuring that the company will continue to support the Police Service as and when the need arises.

The Managing Director believes that, such a gesture from the company will go a long way to assist the police service to combat crime in the region.

According to him, this is not the first time and this will not be the last time his company shall render such a gesture to the Ghana Police Service as he understands the service needs more support.

The Regional MTTD commander, Chief Superintendent Prince Jude Cobbinah with joy received the donation and expressed their profound gratitude to the Managing Director for the kind gesture, saying the donation would be used for the intended purpose.

In furtherance, Superintendent Cobbinah used the opportunity to call on cooperate organizations, philanthropists and other institutions to emulate what Mr. Emmanuel Offei – Awuku has done.

According to him, the company believes in the future and prosperity of the country therefore commits themselves to a higher order of professionalism and character.

The company which has a number of project history in the country is currently constructing a multipurpose sports stadium in the Eastern regional capital, Koforidua and the company’s construction services fall in the following areas such as building, road rehabilitation, bridges, industrial constructions and general civil works.