Protesting youth of Nanton in the Northern region are demanding an Abudu chief, accusing the Dagbon overlord of promoting divisions by filling up chieftaincy vacancies with only members of the Andani Family.

The youth explained, the protest was sparked by failure of the Yaa Naa to “select the right person for the area”, despite a petition and follow-ups by elders and opinion leaders of the town.

The youth, armed with deadly weapons and objects, have been protesting, since Sunday, against the decision of Yaa Naa to select chief of Voggu, Vo -Naa M.B.  Bawah, as chief of Nanton, against their Abudu favorite, Chief of Zosali, Zosali – Lana Haruna Sulemana Tia, who has already occupy the community, receiving homage from lower chiefs  and being protected by members of the town.

The fresh unrest has escalated as the youth continue to block the Vo – Naa’s entry into the community.

The development in Nanton has compelled the Committee of Eminent Kings led by the Asante King, Otumfuo Osei Tutu II to convey a meeting this Saturday, in a desperate intervention to safeguard the Dagbon Roadmap Peace Plan.

However, ahead of that crucial meeting, the youth of Nanton held a press conference Friday to inform the world of their position and expectation on the impasse.

“We start by indicating to the whole world that, prior to the funeral of the late Nanton Naa Alhaji Sulemana, a petition was written to the overlord of Dagbon followed by a delegation to his palace,” spokesman of the youth, Abdulai Salifu Maqthadar said.

“The mission was simple,” he says, adding: “We indicated that, for the sake of of peace in the Nanton Traditional Area in particular and Dagbon at large, there was the need for serious research and consultations to be done to select a chief who shall be accepted by all.  We did indicate that failure to select the right person for the area could set a stage for deadly crisis,” the youth explained.

“Surprisingly, all issues that were raised that were put before the overlord in that petition had been overlooked,” recounting further that, “it was a great shock to all the elders and people of Nanton when we got the news that,  it was the Vonaa who was appointed to be the next Nanton Naa”.

They have therefore vowed “to fight to the last drop of their blood to prevent the entry of Vonaa into the traditional area as the new chief.

“Firstly,  all the elders, sub-chiefs, opinion leaders and all the people of Nanton Area do not accept Vonaa as  chief of Nanton”.

They also alleged that, four out of the five traditional authorities comprising the Nanton District, are already occupied by chiefs from the Andani Royal Family, therefore, giving Nanton to Vonaa, also an Andani royal,  “will mean all the paramountcies have been taken up by the Andanis to the disadvantage of the Abudus”.

The Nanton youth also absolved the Zosali Lana who has been accused by the Gbewa Palace of sponsoring the ongoing protest in the area, saying, he has “no hand whatsoever in the current happenings in Nanton”.

They declared that they have resolved not to accept any other person as the chief of Benton except the Zosali Lana Alhaji Haruna Tia Sulemana, adding, they could sense  “ulterior motive” in the appointment of Vonaa as chief of the predominantly Abudus Nanton, since gate skins in Dagbon that are predominantly Andanis  are not usually contested by Abudus.

“For everlasting peace to prevail in the Nanton Traditional Area, we plead with the overlord of Dagbon to give us an Abudu chief, preferably, the Zoosali Lana Alhaji Haruna Tia Sulemana”. 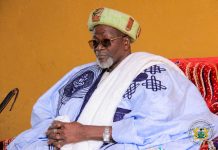 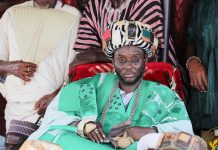 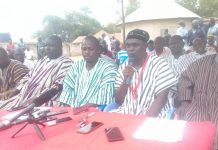