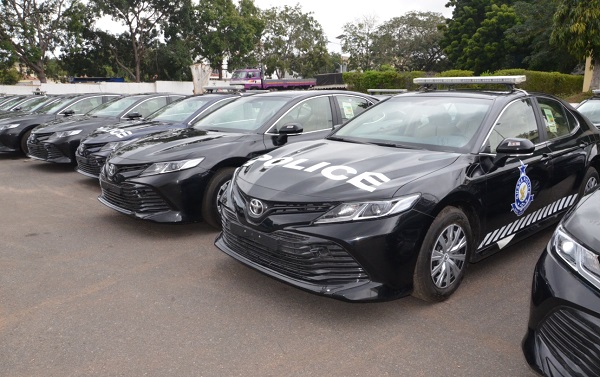 Government’s ongoing transformation agenda for the Ghana Police Service has been given a big boost today the 6th of June, 2019, with the Vice President, Dr. Mahamudu Bawumia, handing over some one hundred and nine (109) multiple purpose vehicles comprising buses, towing trucks, water tankers, ambulances, troopers and pick up trucks to the Service.

The latest presentation which took place at the Police Headquarters is part of efforts of Government to re-tool the Ghana Police Service under the ongoing Police Transformation Programme spearheaded by the Inspector General of Police, (IGP) David Asante-Apeatu.

Before the Presentation, the Vice President in a brief remark indicated that government has taken delivery of a “Bill of Lading” for another 109 vehicles which would be arriving in the country in the next three months.

“Upon coming into office, we were quite frankly surprised about the level of logistical challenges that the Police Service was facing in terms of logistics and equipment. This is why the President made it a point that we should do everything possible to make sure that the necessary logistics in terms of vehicles, equipment, ammunition and so on are provided in an adequate measure” the Vice President pointed out.

He added that “it is for this reason that you are seeing this major ramp up of provision of vehicles to the Ghana Police Service”.

So far government, since 2017, according to the Vice President, has presented 481 vehicles to the Police Service. He explained further that the President is of the view that those who have joined the Service have put their lives on the line for Mother Ghana and so “Mother Ghana must provide for the Police Service the adequate logistics to protect themselves and to defend the security of the nation”.

President Akufo Addo on the 26th of October, 2018, presented 200 Toyota Camry saloon vehicles to the Ghana Police Service at the Forecourt of the Police Headquarters and made a pledge that the executive arm of Government will offer its full support to the Police to allow her perform her duties of maintaining law and order. To that end, the President said Government will continue to mobilise whatever assistance it can to enable the Police provide the Ghanaian people, the kind of service the citizenry deserve.

“Ultimately, the aim of government is to strengthen the Police and fashion it into an honest, disciplined, efficient and robust force,” the President had pointed out during the earlier presentation.

With the presentation of the latest fleet of vehicles, it is expected that Police operations, activities and the general maintenance of the peace of the interior will receive a boost.

The Ghana Police Service (GPS) is the main law enforcement agency of Ghana. The service is under the control of the Ministry of the Interior, and employs over 30,000 officers across its 651 stations nationwide. The Ghana Police Service operates in twelve commands: ten covering the regions of Ghana, one assigned specifically to the seaport and industrial hub of Tema, and the twelfth being the Railways, Ports & Harbours and Marine command existing to handle issues that arise from the country’s offshore oil and gas industry.