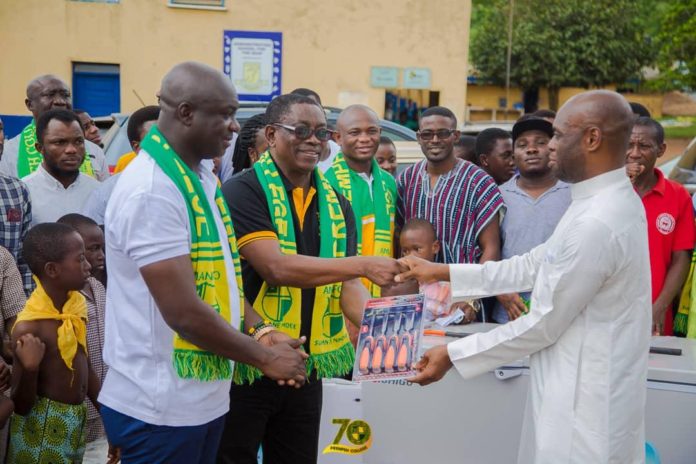 As part of the 70th Anniversary celebrations of Prempeh College, the Greater Accra chapter of the Old Students Association (Amanfoo) on Wednesday June 5 visited the Akuapem-Mampong Demonstration School for the Deaf for a humanitarian outreach programme.

This initiative was part of a series of activities scheduled to culminate into a grand celebration later this year.

The members of the Prempeh College Old Students Association were accompanied by the lovely Yaa Asantewaa SHS Old Girls who showed up in their numbers to make the event a colorful one. The team, led by the Amanfoo Global President Snr. Kwabena Nyarko and assisted by the Greater Accra Regional President Snr. Eric Osei Afriyie, was warmly welcomed by the Headmaster of the School Abraham AnnangYemoson.

The Amanfoo and Adehyee were treated to a beautiful cultural display by the Demodeaf cultural troops as the day progressed.

A donation was then made to the host institution. Items donated included a 600 litre Deep freezer, 40 inch LED TV, assorted drinks, food stuff (bags of rice, bags of gari, bags of beans, gallons of cooking oil) toiletries, basic carpentry tools, plastic plates among other items needed for the students to be adequately cared for.

Authorities of the school were  elated and called on other well-meaning organizations to aid them in meeting their numerous needs.

The Amanfoo and Adehyee were subsequently taken on a tour of the School which was climaxed with an interactive session with the students.

A similar activity would be done in the course of the year by the Amanfoo Ashanti Regional chapter as part of the events earmarked for the 70th Anniversary.

This group is a subset of the larger group, Prempeh College Old Students Association with representation across the globe. The group meets every Tuesday night at 6:30 pm together with Adehyee at the GCB Clubhouse, Adjacent the SDA Headquarters at Ridge, Accra.