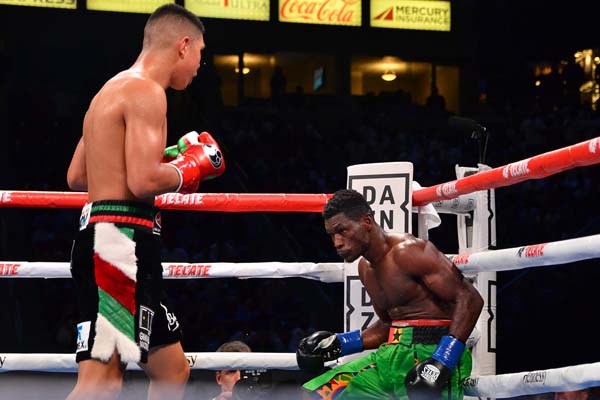 After an opening feeling out round where Munguia didn’t do much, he started stalking Allotey in the second round and then unleashed his power in the third round.

Set up by a vicious body shot, Munguia sent Allotey to the canvas midway through the third round and then floored him again at the end of the round with a left hook.

In the fourth round, with Munguia smelling blood, Allotey was on his bicycle but Munguia still caught him. After a not especially damaging looking combination, Allotey voluntarily took a knee, the third time he was down in the fight.

Although Allotey said he wanted to continue, his heart didn’t seem in it and his own corner stopped the fight to save him from further damage. Time of the stoppage was 2:18 of the fourth round.

Munguia makes the fifth successful defense of his WBO title.

In the post-fight interview, Munguia said he was still undecided whether he would stay at 154 or move up to 160. Still unclear is whether Munguia was much improved from his last fight with new trainer, Erik Morales, in his corner, or if it was due to Allotey being so outclassed.

Whatever the case, Munguia had a much better performance against Allotey than in his prior defense, a scare against Dennis Hogan, that could have gone either way.