Describing the attacks as heartless in a tweet Wednesday Mahama asked the South African government to assume responsibility for “these inhuman actions and implement urgent steps to prevent these attacks from recurring in the future.”

Certainly the South African Government must take responsibility for these inhuman actions and implement urgent steps to prevent these attacks from recurring in the future.

That notwithstanding, Mahama observed  that, “the perpetrators of these gruesome attacks are ignorant of the continental solidarity that was required to defeat apartheid and give birth to the new South African nation.”

Clearly, and as I have said in the past, the perpetrators of these gruesome attacks are ignorant of the continental solidarity that was required to defeat apartheid and give birth to the new South African nation.

He said the attacks “are condemnable and run absolutely contrary to all our efforts at continental integration.”

The xenophobic attacks on Africans in Alexandra, South Africa are condemnable and run absolutely contrary to all our efforts at continental integration. pic.twitter.com/wVWdjgi0Qt

Meanwhile, Deputy Foreign Affairs minister Charles Owiredu has said no Ghanaian has so far been attacked in the xenophobic insurrection in South Africa.

He also noted there are no reports that Ghanaian-owned shops or interests have been hit in the attacks.

Speaking to Francis Abban on the Morning Starr Wednesday, the deputy minister said Ghana is keenly monitoring the development in order to effectively protect its citizens.

“We have been in constant touch with the Ghanaian ambassador in S/A and so far no Ghanaian has been reported dead.

“We have urged all Ghanaians in South Africa to stay safe and avoid areas where the attacks are happening. We have been reliably informed that no Ghanaian shop has been affected so far,” he said.

Black natives in South Africa have for the past week taken to looting and burning of shops owned by other nationals in Pretoria and Johannesburg.

South African police have arrested dozens of the protesters who claim immigrants, especially Nigerians are taking over their jobs and selling illicit drugs.

Ssecurity analyst based in Sudan, Prosper Nii Addo, is calling for more robust engagements between heads of states of African countries and South African authorities.

He believes until the South African Government is forced to commit to ending the xenophobic attacks, such violent attacks will continue to recur.

“We have our foreign missions in our various countries and I feel the engagements have to be more robust. At this stage, let’s get the government of South Africa to commit to addressing the problem and getting the security to address the issue,” he stressed.

South African police have confirmed that at least two people have died with over a 100 people arrested for crimes including malicious damage to property, attempted murder, theft and housebreaking. 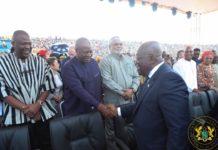 Dec. polls: Resist temptation to use violence – Mahama to Akufo-Addo