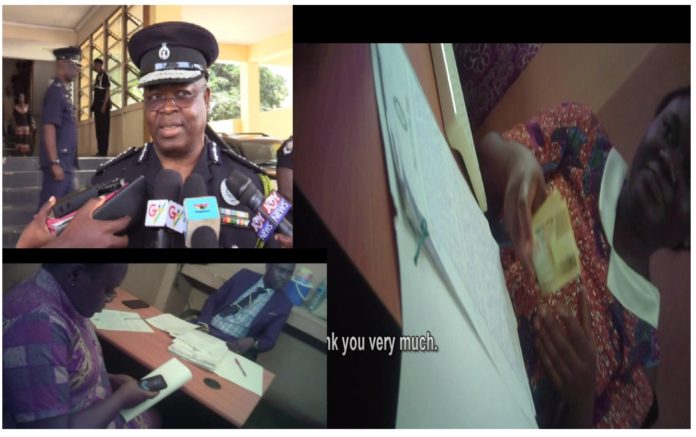 The Inspector-General of Police (IGP) James Oppong-Boanuh has taken delivery of evidence linking some officials of the Domestic Violence and Victim Support Unit (DOVVSU) in the Upper East Region to the rot unearthed recently at the Attorney-General’s Department by the EIB Network’s investigative journalist, Edward Adeti.

A documentary on the uncovered rot, dubbed Cash for Justice, aired last week on GhOne Television and later surfaced on YouTube, exposing a senior state’s attorney in the region, Emmanuel Lawrence Otoo-Boison, advising a crime suspect he was prosecuting to go into hiding after taking a bribe cash of Gh¢1,000 (182 U.S. dollars) and a pregnant goat from a supposed relative of the suspect.

The state prosecutor also demanded £1,350 (Gh¢ 9,483) from the suspect’s family to secure a flight ticket to London for a course he said the Government of Ghana arranged for him without airfare provision.

The suspect, Mohammed Awal, who is standing trial for alleged rape and is also said to be on INTERPOL wanted list for some crimes reportedly committed in Burkina Faso, was granted bail at the Bolgatanga High Court on Monday September 2, 2019. But before he was released from the Navrongo Central Prisons’ custody, some DOVVSU officials asked his assumed relative for money (unapproved) as a prerequisite for his release. The officials received money twice from the presumed relative on separate days. The services rendered at the centre are supposed to be free of charge.

p style=”font-weight: 400;”>A division under the Ghana Police Service, the DOVVSU is a centre where the rights and freedoms of victims of abuse including rape are expected to be defended without compromise. But one of the DOVVSU officers, whilst receiving a “top-up” of an amount the office had extorted from an inferred relation of the alleged rapist, further “compromised the code of ethics of the Ghana Police Service” as she promised to connect the suspect’s representative to the state’s attorney.

Below are a transcript and a video clip of what took place inside the DOVVSU office at the Upper East Regional Police Headquarters:

[A taxicab hired to pick up the suspect from the Navrongo Central Prisons arrives on the premises of the Upper East Regional Police Headquarters. The suspect’s ‘relative’ opens the main door to the DOVVSU office block]

SUSPECT’S ‘RELATIVE’: The car is in.

DOVVSU COMMANDER: The car is in. Where is your house? We have to go and see your house, too. Where is it?

SUSPECT’S ‘RELATIVE’: It is at Namoo.

DOVVSU COMMANDER: So, we will go to Namoo before he is released? Ha-an? We have to go and see your house o before we go to the Police, errhn, Prisons Service.

DOVVSU COMMANDER: So, today we can go to Namoo? Look at the distance.

DOVVSU COMMANDER: You are pleading that I should go to Namoo?

SUSPECT’S ‘RELATIVE’: No, I mean we can go and release him and do that one later.

DOVVSU COMMANDER: Release him before we will go and see your house?(Speaks in Twi) Then, today you will not go anywhere. Even if one is granted bail, he can still be in custody for two weeks. (Rises from a chair; proceeds toward another room; the other officers chuckle and laugh).

A DOVVSU OFFICER: (Addresses suspect’s ‘relative’) You, talk to this woman first so that she will send the message across. Tell her something.

SUSPECT’S ‘RELATIVE’: Erhn, that’s why, I want to tell her, but the way you are seated here.

A DOVVSU OFFICER: We are police…You put your hands in your pockets and tell her something. Sit there. Sit down. And make it fast.

SUSPECT’S ‘RELATIVE’: Ghana is hot o. (Brings out cash and extends it to a female DOVVSU officer).

FEMALE DOVVSU OFFICER: Give it to him (Directs suspect’s ‘relative’ to another DOVVSU officer believed to be her senior).

SUSPECT’S ‘RELATIVE’: (Hands over money to a DOVVSU officer) Thank you. Thank you, my brother.

[Even after DOVVSU officers had extorted cash from the supposed relative of the crime suspect, they never went to see the house of the suretyas required. They only proceeded straight from their office to the Navrongo Central Prisons and handed over the suspect to his relatives. Days later, the supposed relation returns to the office to give a “top-up” of the demanded cash to one of the officers,Cpl. Hannah KyerewaaDuku, who received the cash on behalf of her colleagues.]

SUSPECT’S ‘RELATIVE’: I last came here and promised to come and see my daughter, my mother and the boy. (The DOVVSU officer asks a client to excuse her and the suspect’s ‘relative’)How do we see ourselves somewhere?

DOVVSU OFFICER: Please, you can hang inside there.

DOVVSU OFFICER: (Asks the other clients to stay away further. Then, turns to the suspect’s relative.) Huun.

SUSPECT’S ‘RELATIVE’:You know the other day when I came…

SUSPECT’S ‘RELATIVE’: This one?

SUSPECT’S ‘RELATIVE’: When you asked me for something, I say [sic] I was not having something better. It was just small thing I gave you and I promised when I, I would come back and do some top-up.

SUSPECT’S ‘RELATIVE’: You know, as you know, I don’t want in future say I have a problem, I come, you’ll say I’m a wicked old man. (Brings out cash as the DOVVSU officer laughs) Something small for you to top up whatever was given to you. (Hands out cash to the DOVVSU officer).

DOVVSU OFFICER: (Receives the cash) Thank you very much.

SUSPECT’S ‘RELATIVE’: Thank you very much.

SUSPECT’S ‘RELATIVE’: The other issue is that, you know, the police, you are talking about a Burkina issue.

DOVVSU OFFICER: Huun. But the Burkina case, we don’t have any hand in it.

DOVVSU OFFICER: We can’t do anything. That one is their own problem.

DOVVSU OFFICER: You know, we don’t; it’s a different case, not Ghana.

DOVVSU OFFICER: Do you understand? It’s not Ghana. So, we can’t do anything about it. But for the Ghana case, you know it’s at court.

DOVVSU OFFICER: When the court date, the date is [due]. When we go to court…

DOVVSU OFFICER: Eh-he-en. I will introduce you to the prosecutor (the Senior State Attorney).