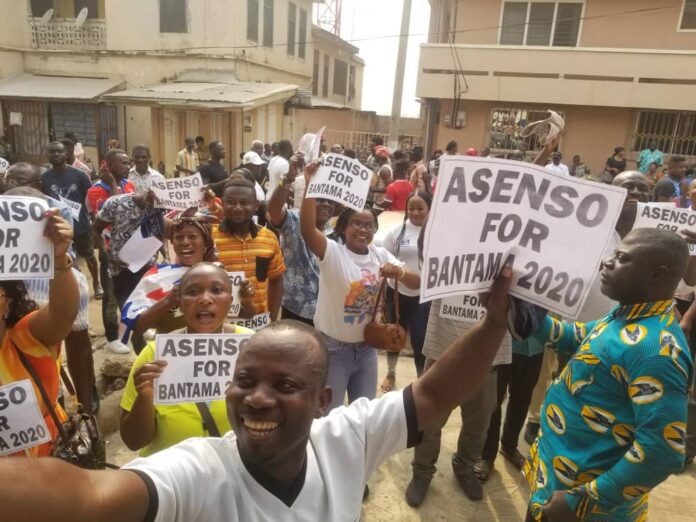 Three groups from three different polling stations in the Bantama constituency in the Ashanti region have coincidentally met at the constituency office to buy nomination forms on behalf of the Deputy Chief of Staff, Mr Francis Asenso Boakye, to contest in the upcoming parliamentary primaries of the ruling New Patriotic Party (NPP).

This compelled the constituency executives led by the chairman to hold a closed-door meeting with the group’s leaders where he explains to them why he can’t sell three forms to three groups from supposed same person’s camp.

However, after the closed-door meeting, they compromised for North Suntreso polling station executives and delegates to buy the forms behalf of the Deputy Chief of staff at the office of President Nana Akufo Addo.

Speaking to Ultimate FM’s Isaac Bediako, the Chairman of North Suntreso polling station, William Osei Boadu, who picked the forms on behalf of Mr Boakye said, the incumbent MP for the constituency has failed to meet their expectation in the social contract they signed with him after voting out Kwabena Kokofu in 2016 parliamentary primaries hence the need to bring in a new person with truck record to effect positive change in the constituency.

“I’m very grateful to represent my electorate to pick the parliamentary primaries forms on behalf of Deputy Chief of Staff Hon. Francis Asenso Boakye, we constitute 11 electoral areas. I choose to pick the forms because Asenso Boakye has done amazing work in Bantama constituency in general.

“In North Suntreso where I serve the party as polling station chairman, our roads were in a very deplorable state but now we can boast of good roads through his support and connections in government,’’ he said.

He also revealed several members of the constituency have gained employment in government and some companies, while several students have also secured scholarships to further their education, at the tertiary institutions to PhD levels both in Ghana and abroad.

“So after checking all these personal contributions from the Deputy Chief of staff, we believe he will be able to address some of the challenges faced by our people in this constituency. That’s why we are calling on him to come and lead us into Elections 2020 and also represent the interest of Bantama in Parliament.

“If we compare him to our present MP, Daniel Okyem Aboagye it’s fair enough to say Asenso is the right person who can serve the interest of Bantama constituency and that’s why we have declared our support for him,’’ he said.

Ultimate FM’s news checks revealed the Deputy Chief of Staff would arrive in Kumasi Thursday, January 31, for the group to present the forms to him at his family house.
However, it is not clear when the incumbent Member of Parliament, Hon. Okyem Aboagye will show up to pick his forms.