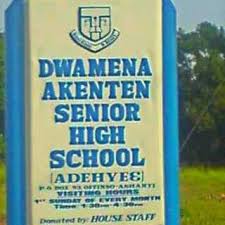 The Senior House Master of Dwamena Akenten Senior High School in the Ashanti region Andrew Agyeman has denied reports that the student who reportedly died on campus was denied exeat to seek treatment.

He also challenged claims the student died at the dormitory claiming: “We are not in the position to confirm he died on campus, we put him in the car when we found him at the dormitory when we got to the hospital, the Dr. pronounced him dead.

He added: “We always here checking the students and their health. The allegation that we denied him exeat is neither here no there because we are parents and we can’t do that. If a student is sick we allow them to go and seek treatment. Even the security men here have been told to allow students to go for treatment”.

The family of the general arts student is accusing the Senior Housemaster of the school for refusing him the right to seek medical attention Sunday even when his health condition had visibly deteriorated.

A student who spoke to Ultimate FM on condition of anonymity said their colleague was found dead in the dormitory after school hours.

The body was reportedly rushed to the St. Patrick’s hospital by some of the teachers where the death was confirmed.