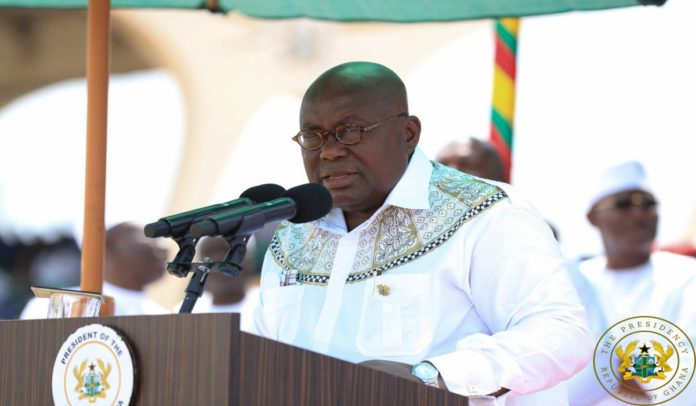 The Chiefs and Elders of Bosome Freho District in the Ashanti Region have appealed to President Akufo-Addo to build a District Hospital for their Traditional Area to augment the two clinics built for them by the Busia government as far back as 1970.

The Chiefs and elders of Bosome Freho made the appeal at the Jubilee House when they paid a courtesy call on President Akufo-Addo on the 14th of February 2020 led by the District Chief Executive of Bosome Freho, Yaw Danso.

Former Member of Parliament for the Bosome Freho Constituency, Gabriel Yaw Amoah, addressing the President on behalf of the Delegation noted that health care is a major challenge in Bosome Freho due to the lack of a modern health facility apart from the two clinics that were built in the District during the Busia administration.

The Bosome Freho delegation further requested that government through the Ministry of Education should give urgent consideration to building a new Senior High School in their traditional area. He indicated that the Constituency currently has only one Secondary school which is not able to meet the educational needs of the entire community.

“We plead with you Mr. President to do everything possible to provide us with one secondary school” Mr. Amoah said.

President Akufo-Addo in his response to the requests by the Chiefs and Elders of Bosome Freho, noted that their concerns bother on issues that are very dear to his heart particularly on the issue of education.

“I get surprised when people criticize former Prime Minister Busia. In just two years and four months in office, he built clinics in virtually every town in the country and yet people talk so bitterly about him. I think my administration must do everything possible to build on his legacy in Bosome Freho” President Akufo-Addo stated.

On the issue of availability of secondary education in Bosome Freho and its environs, President Akufo-Addo said he is very much taken aback that only one secondary school serves the entire area.

“I am surprised that a place like Bosome Freho has only one secondary school. We have to deal with it immediately” President Akufo-Addo said.

The Bosome Freho District is one of the twenty-seven (27) Districts in the Ashanti Region of Ghana. Its capital is Asiwa. The District is among the new Districts and Municipalities that were created in 2008 by the then President, John Kufuor. The District has only one Senior High School, Bosome Senior High Technical School, a District Magistrate Court at Asiwa, the Asiwa Health Centre and a Police Station. According to the 2010 Population Census of the Ghana Statistical Service (GSS), the population of Bosome Freho stood at 60,397.