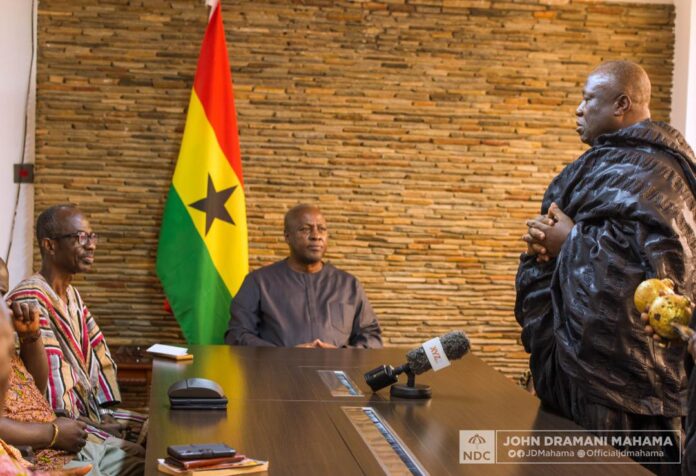 Former President John Dramani Mahama has paid tribute to the late Barimah Nana Akwasi Agyemang, describing the Asanteman royal as principled and a nationalist who contributed immensely to the development of Kumasi and Ghana.

He made these remarks when a delegation from the Asantehene Otumfuo Osei Tutu II led by the Amoamanhene, Nana Agyenim Boateng, called on him to announce the funeral and burial arrangements for Nana Akwasi Agyeman, popularly known as ‘Okumkom.’

Mr. Mahama, who is also the flagbearer of the National Democratic Congress (NDC), noted that the late Nana Agyemang was successful largely because of his insistence on strict compliance with the law, which sometimes led him to fall out with people who thought he was heavy-handed.

“When Nana Akwasi was Mayor he would put his foot down in dealing with issues and this led to complaints about him and the NDC government…”, he recalled.

The late Nana Agyemang passed on at the age of 86. A prominent member of the NDC, he was the longest serving Metropolitan Chief Executive (MCE) of the Kumasi Metropolitan Assembly (KMA).

He also served as Deputy Minister for Environment in charge of the Northern Sector. Because of his unique position in Asanteman, he was the only Minister who stayed and performed his ministerial duties in Kumasi. Additionally, he also served as a Special Envoy.