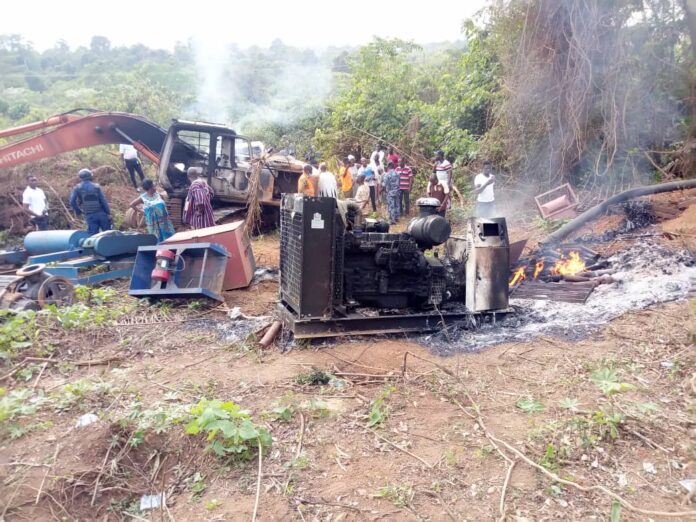 Armed Police Personnel have been deployed to Kwahu Praso in the Kwahu West District of the Eastern Region after rampaging youth in the community and its surrounding villages besieged a Mining Company and setting ablaze to equipment worth millions of Ghana cedis.

Their action is in protest against mining in the community.

Starr News has gathered that residents in Kwahu Praso and Asante Akyem Praso have been agitating against the exploration of gold in the communities by the company accusing it of being an illegal mining firm owned by Chinese.

According to the Assemblymember for Atuobikrom Electoral Area, Anim Boateng, a stakeholders forum organized by the Company some weeks ago ended inconclusively as residents unanimously rejected mining in the area.

However, to their dismay, the company started carting mining equipment to the community to commence mining, excavating large acres of farmlands.

On April 9, 2020, the youth attacked the company with the support of the six Assembly members in the area who helped to evacuate workers of the mining company including two Chinese nationals amid roadblock and gunshot by the angry youth.

He said armed Police Personnel have since been deployed to the community to patrol the area.

Starr News has gathered that one of the Assembly Members has been arrested for inciting the youth.